Last Sunday, I went back to the Antique Mall in Detroit Lakes, Minnesota where I got the Lockwood Photos from.  I thought that there might be one or two more.  I was right..we will look at them and then I will mail them off to Greg.

This is another photo of Greg’s Great Grandmother Esther Lockwood, it is a Cabinet Card. 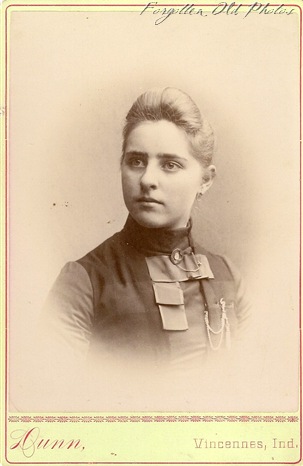 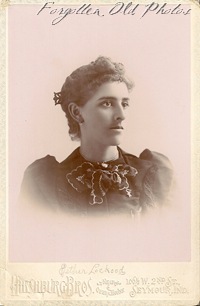 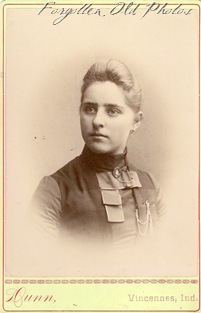 Here I put them side by side so you can look at them together. Which photo is of the older Esther?

This latest photo has very interesting “trims” ..I have not seen anything like them before. The photographer is Dunn from Vincennes, Ind.

We know that Esther was born in 1873.  Here is the Link to the Walnut Hill Cemetery where she is buried, if you scroll down to photo number 4847 you will find Esther and her husband Stephens grave markers in Gibson County, Indiana.

I am not sure WHY? I was supposed to find these added photos. I guess more of this story waits to be told.

The fellow in the Antique Shop thinks that the Lockwood's were relatives of some of the big Bonanza Farm Owners in North Dakota.  The Bonanza Farms were popular in the 1870’s onward, they raised wheat and shipped it out on the railroad.  The farms were usually owned by companies and or groups of individuals that had General Managers and hired young strong Midwestern boys as workers.

On a personal note:  The farms were beautiful. The houses were large and the outbuildings plentiful..grainerys and machinery sheds..lots of old buildings to explore.  In 1995 when we were looking for a “place” in the country, I fell in love with a Bonanza Farm near Ayr, North Dakota.  The house had been updated, it was huge, six bedrooms and four baths, with a game room over the garage, a formal parlor, a kitchen with a butlers pantry and a breakfast nook, a formal dining room, living room and a lovely four season porch with many French doors. The grounds were beautiful with gardens and fruit trees, a creek ran through the property..it was perfect.  It seemed that the Bonanza Farmers also thought it was a perfect central location.  Perfect for a Funeral Home..evident by the crypt space in the basement…apparently this is where they brought the bodies of the young workers that died while working on the Bonanza Farms.  My husband did not see what I saw in that place, he thought it was much too large for two people ...I thought it would be perfect for Murder Mystery Weekends. We bought a place on a small lake in North Dakota instead.