This is another tintype from Joan.  Tintypes were popular from 1856 to 1900. They reached their height of popularity around 1890. Tintypes are not actually tin but a sheet of thin iron.  Tintypes were the very first almost instant photograph, they were a fast and affordable way to mark a special occasion. They could be mailed and they could be carried in your pocket without fear of glass breakage like with daguerreotypes or ambrotypes. 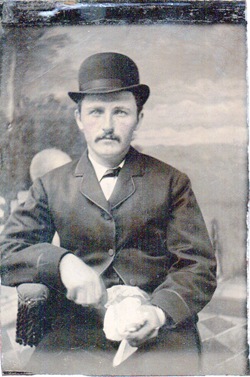 Mens fashions didn’t change like womens fashions..this bowler or derby hat was popular from 1849 and continued well into the 1900’s. I looked online at other tintypes..and found several with the same hat and a similar suit that were dated 1890. 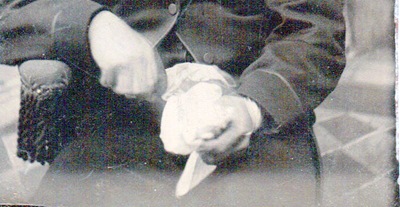 Are his hands bandaged?  Is the bandage going between his fingers of his left hand and up his arm..is his right hand bandaged also or is it just blurry from moving it?   He doesn’t look big enough to be a fighter..as in using his fists.  Did he sustain an injury or was he ill?

Thanks Joan for sharing your very interesting photos with me!