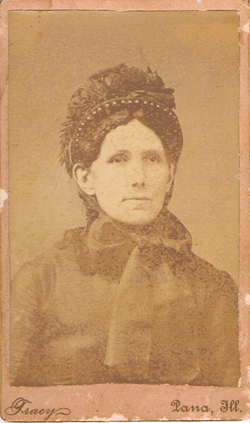 This is a CdV or a Cartes d’ visite that Laurisa shared with me.  The Photographer is Tracy of Pana, Ill.
This ladies head covering has been driving me nuts..at first I thought it was a bonnet. Then I decided that it may be a one of a kind design..after I searched hundreds of images trying to find something similar. As far as I can tell it has some feathers? and a head band of sorts and the whole thing has a huge tie that she so beautifully ties under her chin.
Her dress is unremarkable..plain and simple is all we see.  Her ears stick out and they are not covered..so that leads me to think that this photo is not from the early 1860’s but it possibly could be from the later 1860’s. Some younger women began to uncover their ears in 1865 and 1866. Perhaps someone else has an opinion on this one!  Since the photographer wasn't born until 1857 it seems that this photo was probably taken in the 1890's.

Thank you Laurisa for sharing your wonderful photographs!  Tomorrow we will begin looking at some interesting photographs that Joan emailed me.

Thanks for stopping by, do come again:)
Update from Norkio :
Well, the shoulder seams are the first clue on dating a dress as being from the 1860s or not. In this case, the seams are up near the natural shoulder so this dress is not from the 60s, as the style that dominated was the dropped shoulder seam. I don't think I've seen an example of a dress from that era that has any other type of shoulder seam, honestly.

The hat is the type that sits sort of atop the hairstyle. It may have a small brim or even a folded brim in the back to accommodate hair. One clue for you is when the hats are small the skirts are big and vice versa. So, I'd conclude this photo is of the time when skirts were full, such as either bustle period or Belle Epoch 1890s.

It seems that many of Laurisa's photos were from the 1885-1895s and this one would date to the same time period.
Posted by Far Side of Fifty at 4:47 AM