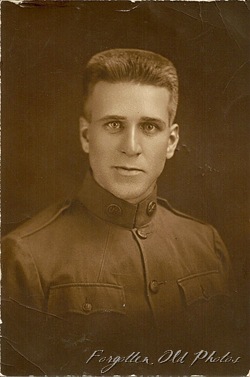 This is a WWI photo.

This appears to be Arthur M. Wisness in 1918.
I searched in Heritage Quest Online and found a Arthur M Wisness who was born sometime around 1891 in North Dakota and whose parents were Norwegian.    He is found in the 1920 census when he was 29 years old  in Wheaton, Minnesota, he is married and his wife’s name is Rosabelle. He was listed as being a Public School Teacher. If this is one and the same person, he survived the war!!

I purchased this photo at an Antique Shop in Park Rapids, Minnesota.

Updates: From Iggy and Abra
Arthur and Rose had two children Osmund and Sylvia.  There is a Music Scholarship in memory of Arthur at Luther College.
I left a message with Sylvia's daughter ( edited to daughter in law)  Sarah yesterday, I am awaiting a call.
Abra also left a message with relatives on Ancestry.  Hopefully we will hear from this family! :)


November 11, 2010 update... I heard from Jon a grandson of Arthur, the photo will be mailed off to him tomorrow.  He said that his Mother is eighty and his Uncle is ninety and he is sure that they will both be excited to see the photograph as he is sure that it is one that they have not seen before.  I hope that they will share a story with me about their father/grandfather, so that I can share it with you:)