This week we are going to have a look at some photos that belong to Forgotten Old Photos Blog reader Laurisa from the great state of Alabama! These are photos that her Grandfather gave her. 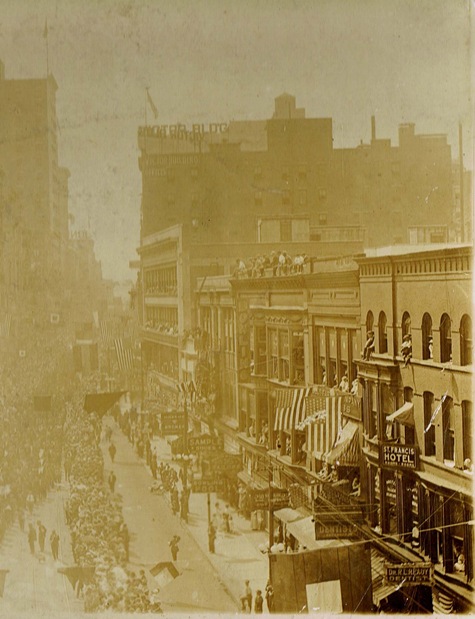 Along this street on the right are these signs, Dr RL Ready(?) Dentist, Dentist, St Francis Hotel Rooms Rooms,  Wells Fargo Company, Bowling Pool, Bowling,  Sample Shoes and on the side of the tall building it says Victor Building Offices.  It probably also says VICTOR BLDG on top of the building..maybe. In the top photo on the left side the only building with a sign that I can read is one called the Palace.
This photo is very faded, but I was able to enlarge the less damaged side for you to see in greater detail.  I think it is a marvelous one of a kind photo.  There are streetcar rails in the street and there is one heck of a parade going on.
I am not sure but this might be Washington, DC on September 17, 1919 the day of the Victory Day Parade after WWI was over and General Pershing visited our Nations Capitol. This photo just bursts with patriotism, all the flags and people sitting in the window ledges..it must have been quite a sight to see.
Any input or opinions on this photo are appreciated!  Thanks Laurisa for sharing!

Update from Iggy:  This photo was taken July 20, 1923.  French General Henri Joseph Eugene Gouraud was visiting, he was the General in charge of the Kansas Troops that were part of the Rainbow Division.  The Rosedale Memorial Arch Ground Breaking Ceremony and PARADE were held that same day.  You can read more about it here.
As for the flags..perhaps they used every flag they could get their hands on..or used School House Flags like Iggy suggested.
Posted by Far Side of Fifty at 4:38 AM