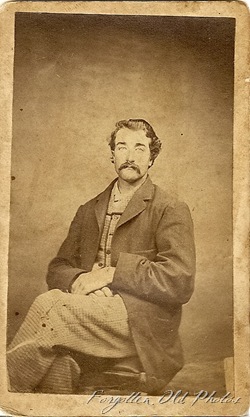 This is the photo that was purchased in the same booth as yesterdays photo at an Antique Mall in Motley, Minnesota.  This one was fifty cents too.

Here is the back of this card..there is a name.

H. H. Matteson. I did find an H. H. Matteson who was 38 at the time of the 1860 census..he was a miner that was born in Rhode Island and was in California in Eureka Township. Tis pure speculation on my part if this is really him or not.  I found a few other H H’s but none fit the time of this photo which I believe is 1860 to 1870..and I think the gentleman is between 30 and 40 years old.  Perhaps a relative will pop up someday! Or this card could be anyone with a friend named H. H. Matteson.  This is a CdV and it has slightly rounded corners..most likely from wear.

They must have cut these images out by hand..this one in particular is not very straight on the card.