When a photo is returned to a family and I have heard back from them that they have received the photo I always write a Full Circle post.  Recently I returned Arthurs Photo to his grandson Jon. 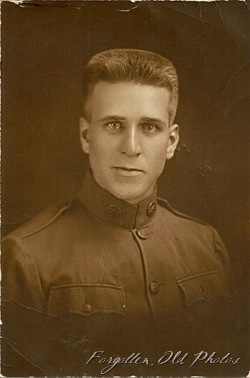 Arthur Wisness
Photo Number 366
This is what Jon wrote:
Connie,
Thanks so much for sending the photograph of my grandfather. My cousins and sisters and my mother have been to your blog and are very excited to see the photo.
Arthur and Rose had two children, Osmund Wisness who was a doctor and is now 90 years old. He was married to Jane and they had 5 children, Steve, Craig, Mark, Paula, and Barbara. And my mother Sylvia Wisness who is now 80 and married to David Storvick and had 3 children, Kristin, Jon, and Sarah.
As far as the war photo goes Arthur was a clarinet player in the army band, he did not see combat. My favorite memories were visiting on holidays and listening to Arthur play the piano, he was a fabulous piano player and could improvise and play ragtime and show tunes. He was a music teacher and later a superintendent of schools. He died while I was in grade school.
Thanks again.......................Jon
As always it is a pleasure to reunite a photograph with family…I just love that part! Iggy was instrumental in this reunion..he found me the phone number..I called and left a message..can you imagine what you would do if a stranger called you and said “ Hi, My name is Connie and I think I have an old photograph of your Grandfather.”  Luckily Jon returned my call a day or two later.
I would like to add that Arthur has the most beautiful eyes I have ever seen in an old photo.
Thanks for stopping by, do come again:)

Update: November 26, 2010 I received a lovely letter from Arthur's daughter Sylvia. Here is part of what she wrote:
Dear Connie, I am thrilled to see the picture of my father, Arthur Wisness in Army Uniform in 1918. He played clarinet in the Army Band, he was an educator in the public schools. My daughter Kristin sent copies of the picture to Osmund's children.  I plan to frame this photo and give it to my son Jon, he was so excited!  Many Thanks, Sylvia
Posted by Far Side of Fifty at 4:33 AM