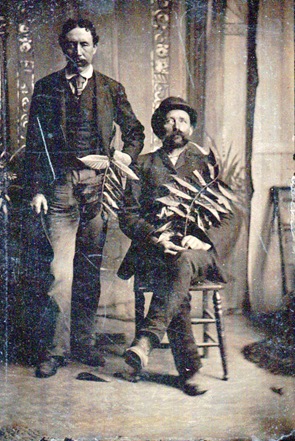 This is another mysterious photo that Joan shared with me.  It was amongst her families old photos but it was not marked with names.  So it remains an unknown.

What do you think the branches symbolize if anything? I have one idea..but it might be far fetched.  These are very large compound leaves with an opposite arrangement on the stem.  This makes it highly probably that they are some kind of Ash leaves..or at least some kind of leaf in the Oleacea Family..perhaps they are Olive leaves or branches ( which grow in California)?

Maybe this photo was taken in California..maybe it wasn’t.  Perhaps the branches are just branches and they don’t have anything to do with peace and contentment.

My thought is this:  Two brothers had a feud.  They both went to California where met up and buried the hatchet, struck gold while working a claim together and had this photo taken to send back to their ageing Mother. Now what do you think?