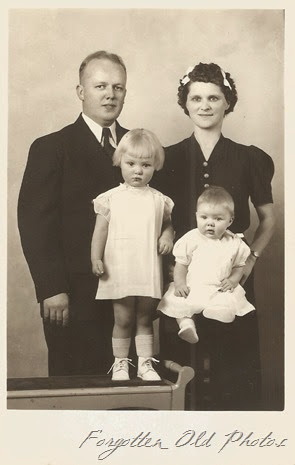 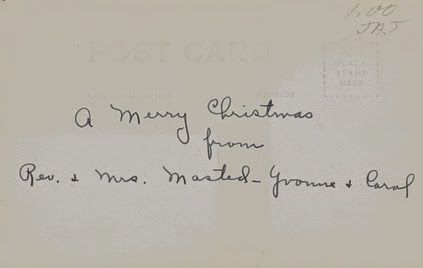 A Merry Christmas from Rev. + Mrs. Masted ~ Yvonne + Carol
I found several Reverends…Fred, Lars and Harold…
The dress that the Mrs is wearing is possibly from the 1940’s??
Thanks for stopping by.
Update from Iggy:
Agnes Margrete "Aggie" Lien Masted (b. Sep. 28, 1913 d. Jan. 18, 2008 :  Was the wife of Rev. Walter Masted and mother of Yvonne, Carol, and Wanda.The Rev. Masted died in 1945 - within a few years after this Christmas Card was sent out. Your photo-dating (the dress) is spot on.  He died following a surgery.

In 1937 Walter and Agnes were married in Duluth.   He served Lutheran congregations in Duluth, and the Detroit Lakes communities of Richwood and Bakke, he was serving in Greenbush when he died.