This is a photo from blog reader Tulla. 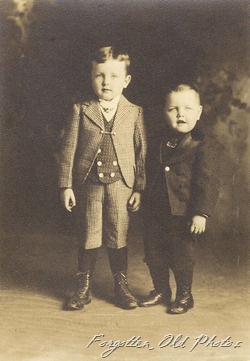 Here is the back of the photo. The photo was most likely taken in 1901. 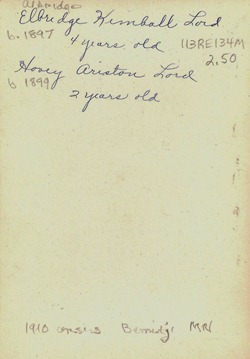 I did find them in the 1910 Census. The parents of these boys were Ariston and Mary Lord who were both born in Maine.  In 1910 Ariston was a foreman of a lumber company.  I also found him in the 1880 census in Muskegon Michigan working in a mill.

The last time I can find the boys is the 1920 census, they are still living with their parents at 903 Beltrami Avenue in Bemidji Minnesota. Elbridge is listed as a railway laborer.  His name is spelled Albridge in some records and Elbridge in others.  His brother may be Harey or Harry.