This is a WWII  group. 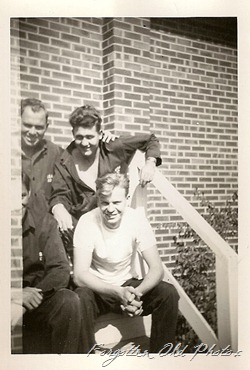 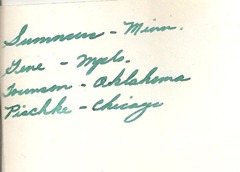 I still believe that these were Gene’s photos or someone close to him.  We don’t have a last name for Gene…but I bet his sister or his wife was named Margaret whose last name was Lundborg..but that could be her married name not her maiden name.
Thanks for stopping by, do come again:)
Update:


I found this Obituary for a Margaret Lundborg.
Margaret Elizabeth Larson, 94, of Brainerd, died Friday, April 30, 2010, at Harmony House.

Services for Margaret will be 11 a.m., Friday, May 7, at Lutheran Church of the Cross in Nisswa. Interment will be at Evergreen Cemetery in Brainerd.

Margaret was born July 4, 1915, in Pittsburgh, Pa. Early in her life, Margaret moved with her family to the Brainerd lakes area. She was united in marriage to Harry Larson. Harry died in 1962. Margaret owned and operated Lundberg Jewelry in Brainerd for many years. She was a member of Lutheran Church of the Cross, Zonta, Eastern Star, and a 50-year member of the American Legion Auxiliary. She enjoyed the outdoors.

Margaret will be missed by her cousin, Ruth Maples, of Brainerd; and several nieces and nephews.

She was preceded in death by her husband, Harry and her parents.


Update from Jacqi:
Here is a link that goes with this Margaret.