This is a CdV from the antique shop in Detroit Lakes Minnesota. 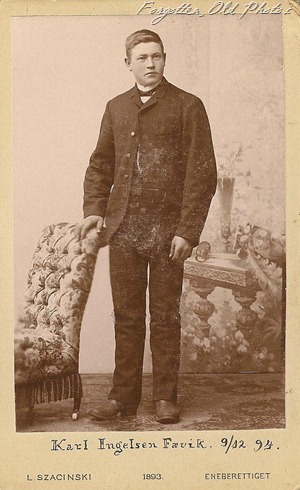 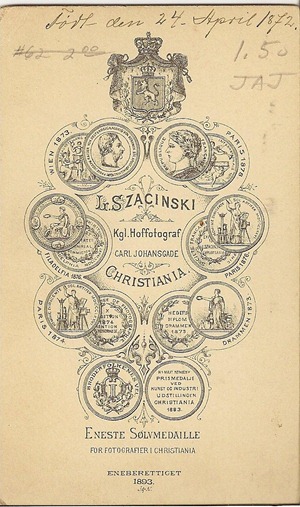 Fodt den ( Born in?) 24 April 1872
This is a CdV from Christiania (Oslo Norway) The photographer won lots of awards and proudly displays them on the back of his work.
I find it a little strange that this CdV has a name and a date on the front of the CdV.  Perhaps his family was wealthy..or famous or perhaps the card was used as a Funeral Card and sent to relatives in the United States.
Thanks for stopping by, do come again:)
Update from Anonymous:
The photographer must be Ludwik Szacinski de Ravics, http://bit.ly/uqb9Et . Born in Poland, refugee after rebellion, trained in France, to Norway in 1865.In Christiania from 1869. Became royal photographer in 1888, lots of medals.He died in 1894, but it seems his widow continued his practice until 1916.
Karl Ingelsen is found in the Norwegian census from 1900, at the farm Fevik in Nannestad. http://bit.ly/sA45dsHis father, Ingel Kristoffersen was married to Dortea Jensdatter, the daughter of Kari from yesterday. So Karl is probably Kari's grandson. Dorthea not listed in the census, and Ingel is listed as widower, so she is probably dead by then (in 1887, according to the ancestry.com link from yesterday).It seems Karl (in 1900) is married to a Mina, and they have two children, Ingvald I. (1897) and Ivar K. (1899). The ancestry-link list only Ivar K.It seems hard to find any of these names in the emigration records.
The name on the photo seems to be spelled with an "ash" - Karl Ingelsen Fævik.


Tore in Canada knows Karls Grandchildren and will get the photo to them.  I will mail the photo on Monday November 21 2011