This is a CdV from the Antique Shop in Detroit Lakes Minnesota. 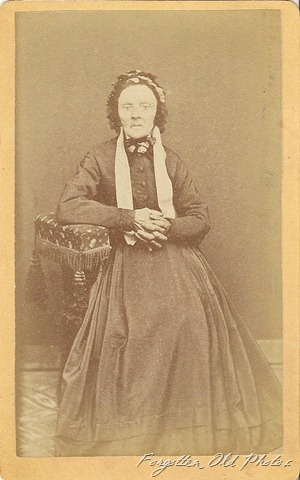 This lady looks awfully tiny to me..but her hands look very large. I wonder what her bonnet with the long ribbons is called? 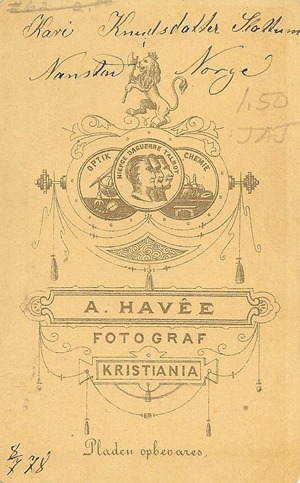 This is the back of the photograph.  Note the 8 with an x under it and then a 78.  I think this may mean that the photograph was taken in August of 1878.

The photographer was A. Havee  Kristiania which is now Oslo.

Thanks for stopping by, do come again:)
Update from Anonymous:
The photographer is likely this one, although the spelling is slightly different:http://bit.ly/sxElwIIt says that Auguste Havée was born and trained (with "the famous Professor M. A. Gaudin", Paris) in France. He practiced at the Norwegian west coast in 1859 (Stavanger, Haugesund, Bergen), but moved to Christiania before 1865. He died 1880, which probably means that this photo is from between 1865 and 1880.The spelling "Kristiania" rather that "Christiania" could indicate that the photo is from after 1877.
Knudsdatter = daughter of KnudI read the last name as Slattum. There are two Slattum in Norway, both just north of Oslo:Slattum, NittedalSlattum, NannestadOne might read the lower left text as "Nanstad" (with much good will), which could mean Nannestad? Searching Norwegian census data (http://bit.ly/uSLQKO), I found the following inhabitants at the farm Slattum in Nannestad, in 1865:Jens Hovals., husband, farmerKari Knudsd., wifeDortea, daughterBerte Marie, daughterKari was 62 in 1865, so born approx. 1803.See also http://bit.ly/tvxIgv (which was instrumental in finding the above census record). Kari Knutsdatter, born 1803, death 1887."Hovals." above should probably be "Hovelsen".


Nannestad is often pronounced Nann'stad and that's probably it's spelled incorrectly.Since she was born 1803, she also experienced the great Norwegian famine of 1809. That may explain the seemingly tiny body.


Update from Ancestry:
Her Father was Knut Larsen, Haga Holter Bidsler  born 1765
Her Mother was Berte Olsdatter, Holter  born in 1762
She married Jens Hovelsen, Slattumeie who was born in 1786


Update:
I located Kari's Great Great Grandson Tore in Canada.  I will be mailing the photo soon:)