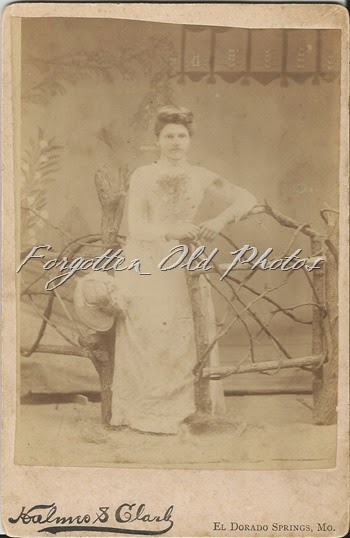 Leona Clinton
Prop of Ethel C. Lowry
This Cabinet Card has a pink back.  From 1880 to 1890 different colors were sometimes used for the face and back of the mounted photos.
Thanks for stopping by.
Update from Iggy:
I think the Ethel referred to might be Ethel C[linton?] Lowry, the daughter of Dane Clinton. She was born in Aug, 1882 in Missouri and moved with her family to Los Angeles, CA sometime before 1900. I am not sure how she might be related to Leona - the missing 1890 US Census left a big hole here. Leona might have been an older sister. Leona does not appear with the Dane Clinton family in 1900. Ethel married Homer T Lowry and lived in the San Diego area.