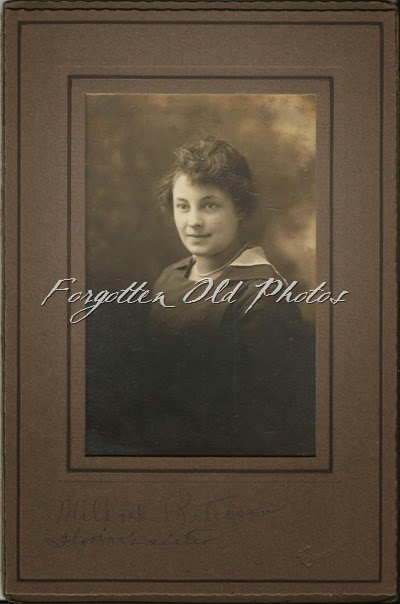 The photographer remains illusive.  The Imprint starts with a C   my best guess is Conard.
Thanks for stopping by.


Update from Iggy:
Perhaps this is the daughter of Erick W Peterson (abt 1875 in Finland - ?) and Mary Peterson. The family lived in Menominee, Michigan in 1920.Erick was a Machinist for an Iron Mine.At the time of the 1920 US Census, Mildred Peterson was 22 years old and her sisters, Marie Peterson, 20 and Florine Peterson was 10. They had a baby brother named Alfred Peterson, age 7.This Mildred (abt 1898 in Wisconsin) was a stenographer. I don't know what happened to either her or Florine
Posted by Far Side of Fifty at 4:04 AM