This photo was featured on May 9, 2010.  Almost five years ago.  Once in a great while, someone recognizes a photo that does not have a name. 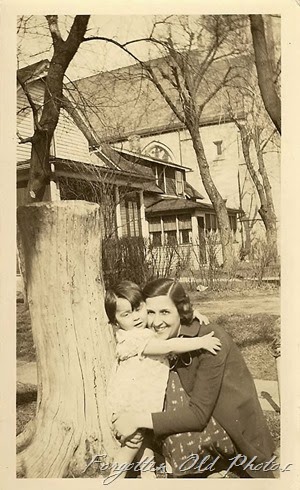 I realize this is an old post. I just found this picture. This is my mom and one of my older cousins. Do you remember where you got it? She was from the Alexandria MN area.

I do not remember where I got the photo, mostly likely in antique shop in Park Rapids or Detroit Lakes. If you would like the photo I am happy to return it to you, please contact me by email with your address. My email can be :found by clicking near the yellow flower or on Far Side of Fifty...the email is in my profile.

Melanie emailed me this information.

Thank you for getting back to me. I was so surprised to see that photo. I haven’t figured out who the baby is yet, but as the keeper of the photos I know I have seen that baby before. I will keep digging.

My Mother was Edna Viola Frisell Milam. She was born in Starbuck MN on December 7, 1922, to Carl and Britha (Berglund, Peterson) Frisell. She had three brothers and two sisters and since both of my grandparents had been married before, she also had four half-brothers and two half-sisters. She was a telephone operator during the war in San Diego CA. She was living with her older sister and it was there she met my father, John Milam. He was in the Navy with her brother Ed. They married and had 4 children. They divorced after about 11 years. After the divorce we children and Mom moved back to Alexandria. She was a telephone operator there too. There were no dials on the phones then. I remember picking up the receiver and telling the operator that I wanted to talk to my Aunt Carol, and they would put me right through. She had decided to go to college to be a teacher, so we moved into the old family farm for a year to save up. (No running water, a pump on the kitchen sink and an outhouse. Baths in Lake Le Homme Dieu with Ivory soap because it floats and in the winter, in a tub on the kitchen floor with water heated on the stove.) When I was nine years old. We moved  to St. Cloud and she got her degree. We moved to Fargo in 1966 and she taught high school English. After she retired she moved back to Alexandria for a few years and then to St. Cloud. She died in St. Cloud on September 23, 2003. She was an amazing progressive woman who raised us all on her own and somehow managed to turn out four well adjusted, thoughtful, civic-minded, (now old) kids. The last of her siblings , Aunt Carol, died in February in Seattle. She was 98 years old.

My Mom looks to be in her early 20s in the picture. I can’t place the area. Even the church doesn’t look familiar. Perhaps Little Falls? She had brothers and sisters in the area.  I would love to have the picture.

Hi Melanie,  I will search for the photo this morning and hopefully get it in the mail this afternoon.  IF I were you as time permits you should start at the beginning of my blog and look at all the photos, there may be more photos of your Mom or her family.  Since I started I have presented over 1700 photos so after awhile everyone looks familiar to me.  BUT I have a feeling that there are more photos of your Mom..  I also have about 3,000 photos here that have not been presented yet.   When I have time I will go back to my original scan, I used to keep them in folders from where they came from and they are all on my Simple Save Backup.  Connie

April 16, 2015 Hi Melanie, I mailed the photo today.  I found it in my archived photos but apparently I never noted where it was from.  Could have been Park Rapids, DL, Perham  or Motley.  Connie

April 23, 2015 I received the photo. Thank you so much. You may use any of my words in your blog. I am so proud of my mother for what she achieved in her life. She was the greatest mom ever.

Thank you Melanie for sharing about your Mother the beautiful smiling woman in the photograph.