This was a fast Full Circle as Full Circles go!  Susanna Rosalie and Sue Thomas made this full circle possible. Sue located the photographer and Susanna figured out Emma's name. What they did was remarkable!
Iggy left a message at Ancestry for Barbara. 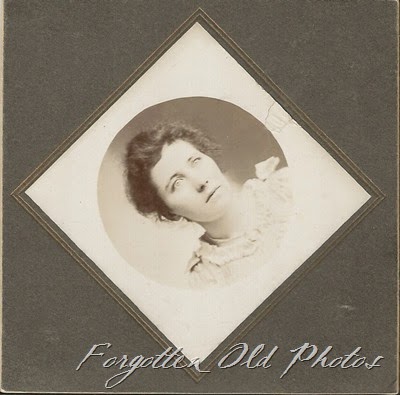 Photo Number 1874  Emma Wicklund
I heard from Barbara:
I'm contacting you about the photo you posted of Emma...she is my grandmother.  Her son Kermit is my father. I would love to have the photo....where did you find it? If in a shop  in North Bend/Coos Bay it has been just around the corner for years. We live in Coos Bay.
To fill out your knowledge some....My dad was killed in a logging accident in 1943, when I was 3 yrs old. After the war Mom remarried to Wilmer Northup of Myrtle Point [just down the road]. They had 2 girls.
I also left a message on your blog, but don't have much experience with messaging that way and am more comfortable with old fashioned email.
See you down the road
Barbara

Hi Barbara,  A fellow by the name of Craig sent me a whole box of photos a few years ago.  I have been featuring them from time to time on the blog.  He purchased them from different antique shops in California and placed many with relatives.  He then decided he was through with the project and mailed them to me.
I am happy to send the photo to you.  I will need your address.  Connie at Forgotten Old Photos
BTW you live in a beautiful area of Oregon!

Barbara replied:
It's interesting that he purchased them in Calif.
Emma only lived for a short time in Long Beach Ca.  I think the families first settled in that area because of the fishing industry. Not sure why/how they got to Oregon, except that fishing was  a big industry here also.  I found a cousin of my dad's that remembered playing with him during those couple Calif years. Emma came back to Coos Bay in 1921 , married Alfred Gunnell, a widower with several children and lived on a dairy farm for the rest of her life. She died in 1954.
We spent most of our working years in Calif and spent many vacations here in the Coos Bay area visiting my family. When we retired my Mom and step-dad were also retired to here so it was easy to settle in this area. I brought my husband [a city boy] to the country and he loves it. Doesn't miss Calif where he grew up.
That you so much for doing this....
Barbara

I sent the photo off in the mail.

The photo has arrived...thank you very much.
You can post what I originally sent with this added:
Emma was born 1876 in Finland, daughter of Axel Kova and Britta Yxfaste. The 1920 census says she arrived in the US 1900. She married Albert Wicklund 1907 in Marshfield, Ore. [It was later changed to Coos Bay]  Albert died in 1916. Sometime before 1920 she went back to her family in Long Beach Calif where she is during the 1920 census. By 1921 she has returned to Marshfield and married Alfred Gunnell.
Hope this helps with you Full Circle post.
See you down the road
Barbara
Thanks for stopping by!