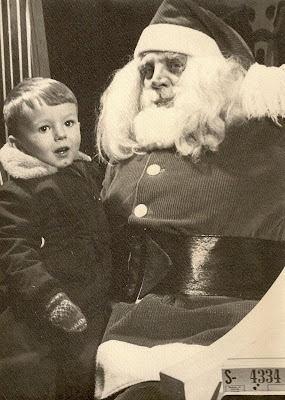 Today I will begin sharing a few of the Christmas photographs that were in my box of photos.  I call this one "Boy with Santa"   This was probably some sort of promotional photograph..or perhaps it was one of the early Santa/Child photos.  Santa's suit was corduroy!

In one of the nearby towns Santa was in one of the stores for a few Saturday afternoons just before Christmas..I do not recall that they took photographs, Santa handed out little tiny candy canes, I never sat on his lap either, I just stood there and rattled off my list while holding onto my brothers hand..when I was done I shoved him forward..if he didn't say anythng I told Santa what he wanted.  What do you remember?  Did you visit Santa with your list?
Thanks for stopping!  Stop by again anytime:)
Posted by Far Side of Fifty at 8:58 AM