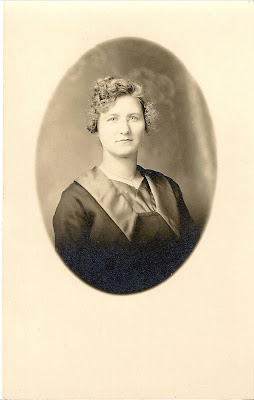 This is a postcard..an AZO one from 1918 to 1930.  Someone has written "Grace" on the back.   She looks very much like the person Esther  that married Walter Davison in Photo Number Four.   Perhaps her middle name was Grace?  Or perhaps she had a sister named Grace..or perhaps this photo  post card went to a person named Grace.  Who knows..perhaps Abra will run the name again..and see if Esthers middle name was Grace!
The neckline on this dress was altered..it must have been too low cut..so an inset was added!
Thanks for Stopping by, do come again! :)
*** Update Sunday December 13, 2009  I have located and spoke with Grace's son and daughter in law..we will be getting together so that they can look through all of my photos..success at last ..some photos are finding their proper home!!
*********
Update: This is not Grace, but it is one of her sisters..either Esther or Bertha.  This photo went Full Circle on July 02, 2010 .. Full Circle Seven :)
Posted by Far Side of Fifty at 2:47 PM