This is a old photograph from Craig’s Collection. 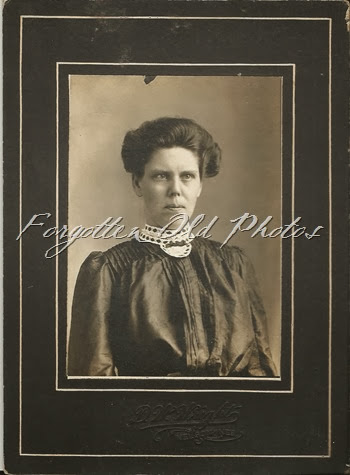 The photographer is D.W. Wright of Nelson Neb
I will guess that this is a photo from around 1900 –1905.  The gown looks pigeon breasted to me.

Ella Wood
Thanks for stopping by.  Do come again.

Ella Wood (Jul 1872 in Missouri) lived in Nelson, Nuckolls, Nebraska in 1900 with her brother Simon Joseph "Joe" Wood. She was single at that time.
Her mother was Mary Wood, who later married a fellow named  Milner.
Mary Wood and her first husband had ten children, Ella ,Will, and Simon Joseph "Joe" and seven others.
She married a John W. Childers (she is shown on Simon's gravestone).  It is unlikely that she had children since she was married sometime after 1928.

I found her obit:
Mary Luella Jane Childers, daughter of Simeon and Mary Wood, was born July 29, 1872 and departed this life July 26, 1957, at the age of 84 years, 11 months and 27 days in the Superior hospital.She was born in Missouri, moved to Kansas in 1880 and to Nelson in 1902 where she has lived since.She was united in marriage to J.W. Childers in 1930 and they had eight happy years together.Ella became a Christian at the age of 18 and lived a happy Christian life.She was the second youngest of ten children who all preceded her in death. She leaves a number of nephews and nieces and many friends.Funeral services were conducted at 10 o'clock Monday morning in the Nelson Christian church (sic), with the Rev. Clyde Goddard officiating. The casketbearers were L.F. Petz, Floyd Rouse, Joe Diehl, H.M. Adamson, C.A. Chamberlain and Paul Hattan. The service music was provided by Mrs. Ross Clem, James Murphy, Joe Van Valin and Mrs. Davis Smith, with Mrs. James Kennedy at the organ. Burial was made in the Nelson cemetery (sic).
Posted by Far Side of Fifty at 4:03 AM