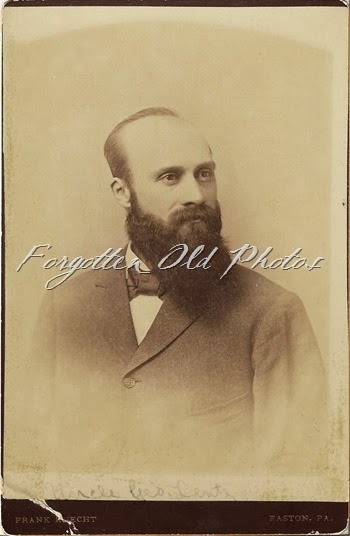 From Iggy:
GEORGE W. LENTZ, foreman in foundry, L.V.R.R. shops, Sayre, is a native of Weatherly, Carbon Co., Pa., born September 3, 1847, a son of George and Mary M. (Kibler) Lentz, natives of the same county. The father, who was a carpenter, died in Weatherly in 1873, in his sixty-fifth year; the mother resides in Carbon county. George W., who is the ninth in order of birth in a family of ten children, of whom three are living, received a common-school education, and clerked in a dry-goods store a year; then in 1863 was employed by the Beaver Meadow Railroad Company (now a branch of the L.V.R.R.), in the foundry, where he worked about twenty-one years, acting in the capacity of assistant foreman from 1870 to 1884, when he went to Easton, Pa., and engaged in the foundry business for himself, but remained there only one year, and worked a short time in Birmingham, Ala.; then was in the Standard Steel Works, of Thurlow, Pa., and the Baldwin Locomotive Works, Philadelphia; from the latter he came to Sayre in 1886, where he was employed as foreman of the foundry, and has acted in that capacity since. Mr. Lentz was married in Weatherly, Pa., in December, 1874, to Miss Mary A., daughter of Joseph and Ann (Burn) Fletcher, the former of whom was a native of England, and the later of Wales; her father is a molder and a resident of Waverly, N.Y.,; she is the eldest of eight living children, and was born in Easton, February 10, 1854 [died 1 Nov 1931 in Springfield, Clark, Ohio]. Mrs. Lentz is a member of the Presbyterian Church; Mr. Lentz is a member of the Knights of Pythias, Sodi Lodge, No. 80. He is a stanch Republican, and served a term as school director in Weatherly. Pittston Gazette 15 September 1909George W. Lentz, former resident of Sayre, died a few days ago in Philadelphia. Death was due to appendicitis, after an illness that lasted only three days. Sixteen years ago Lentz was foreman of the Sayre foundry, and when that shop was discontinued he went to Philadelphia and took a position with the Baldwin Locomotive Works.
Posted by Far Side of Fifty at 5:00 AM