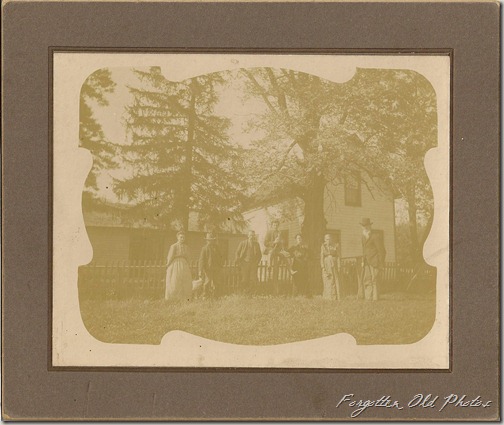 James sent me an email.

James was my 3rd great grandfather, the couple might be John White and Lucy White Frankenberry. The young man on the fence post with dog might be Earl White my Great Granfather. James was born in 1818 and died 1910 at the age of 92. His first wife was Anna Wolfe who died in 1884, he married a second time a Lottie Reed who died in 1906.

And  a little more info!

James Frankenberry was born in Monongalia Virginia now West Virginia in 1818. He came to Ohio in the 1850's with his wife and nine children. He was a farmer and died 12 Jun 1910 in Liberty Twp Ohio. He is buried in Bennington Chapel cemetery Ohio. When he died he was living with his daughter Lucy White Frankenberry and John White his son in law. He married Anna Wolfe in 1839, she died 1884. He married a Lottie Reed in 1886, she died 1906. His children were Emaline, William, George, Susannah, James, Thomas, Eliza, Hannah, and Lucy.

James also wrote “Thanks, yes I received the photo.”

I am always happy to send photos home.