This is a Cabinet Card from the Flea Market in Wadena Minnesota. 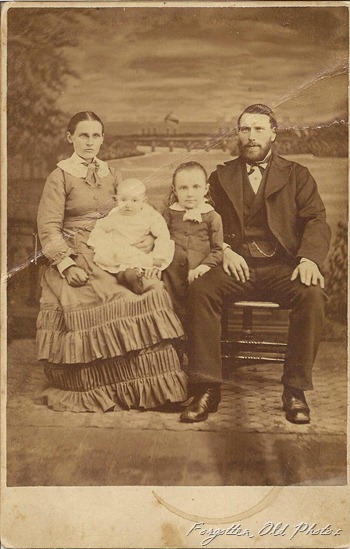 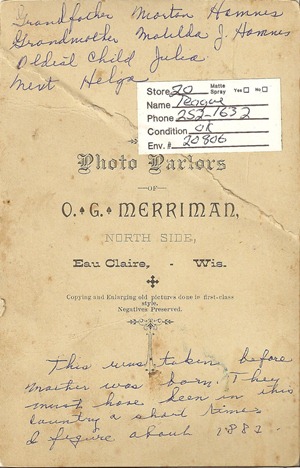 Grandfather Morton Hamnes
Grandmother Matilda J. Hamnes
Oldest child Julia
Next Helga
This was taken before mother was born.  They must have been in this country a short time.  I figure about 1882.

"Tellie" was Tilda Marie Hamnes. She married Rudolph Gordon on 8 Sep 1906 and they had a daughter Phyllis Mae Gordon (b. 1 May 1907 in Minneapolis, Hennepin, Minnesota) and a son Irving (b. abt 1918).In the 1930 US census - Rudolph is shown in Montana and "Tellie"\"Tille" is living with her sister Helga - who married Paul Kwait\Krviat on 10 Feb 1906, but he is no longer living with her. The Kwait's had a daughter and a son also, Marjorie (b. abt 1918) and Adrian (b.13 Nov 1906 d. Mar 1978) Also living with them is a nephew Trainor Phillip. I would assume this is Julia Hass' son and Julia remarried.So the sisters, once (re)married, were Julia Phillip(?), Helga Kwait, and Tilda Gordon.
Posted by Far Side of Fifty at 4:02 AM