This is a photo from the antique shop in Detroit Lakes Minnesota. 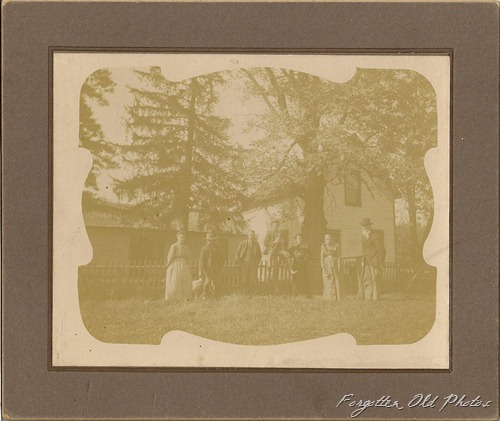 On the back in pencil is the name Grandpa Frankenberry Centerburg Olio ( which is most likely Ohio) 1909 ( or 1907) 89 years old.  I will guess he is the gentleman on the far right.

As we look closer, two dogs are in the photo and a balancing on a fence post boy.
Thanks for stopping by.  Do come again:)

Update from Iggy:
This might be James Frankenberry, widowed in 1910 and living with is daughter and son-in-law, John and Lucy White in Liberty, Ohio (about 25 miles from Centerbury).

Update: From a Relative
James was my 3rd great grandfather, the couple might be John White and Lucy White Frankenberry. The young man on the fence post with dog might be Earl White my Great Granfather. James was born in 1818 and died 1910 at the age of 92. His first wife was Anna Wolfe who died in 1884, he married a second time a Lottie Reed who died in 1906.