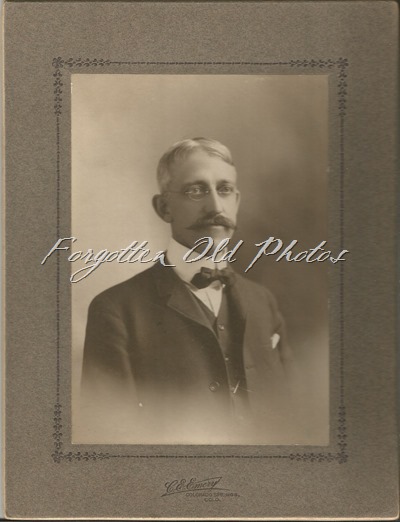 E.E. Rittenhouse
Thanks for stopping by.

Update from Iggy:
Elmer Elsworth Rittenhouse was born in June, 1861 in New York. He died January 2, 1920 in New Jersey."Elmer E. Rittenhouse, Assistant Secretary of the Equitable Life Assurance Society, died at 1:30 yesterday morning in the Mountainside Hospital, Glen Ridge, N.J., of blood poisoning caused by an infected tooth. He was 58 years old and lived at 22 Prospect Terrace, Montclair.As a young man Mr. Rittenhouse worked as a telegraph operator and became Superintendent of the telegraph system of the Colorado Midland Railway. In 1898 he went to Korea to build railroads and did not return until 1902, when he entered upon three years of editorship of The Daily Telegraph of Colorado Springs. His appointment as Deputy Commissioner of Insurance of Colorado followed.In 1907 he was elected President of the Provident Savings Life Assurance Society, resigning in 1911 to become Conservation Commissioner of the Equitable. During 1914 and 1915 he was active in the formation of the Life Extension Institute, of which he was a Director.Source: New York Times, Saturday, January 3, 1920At Montclair, NJ, Jan 2, 1920, Elmer Ellsworth Rittenhouse, in his 59th year Services at his residence, 22 Prospect Terrace, Monday, Jan 5, at 2:30 o'clock. Train leaves Hoboken, D L & W 1:39 P.M. It is requested no flowers be sent."Source: New York Times, Sunday, January 4, 1920