We continue our look at foreign photos.  I think this may be someone famous. 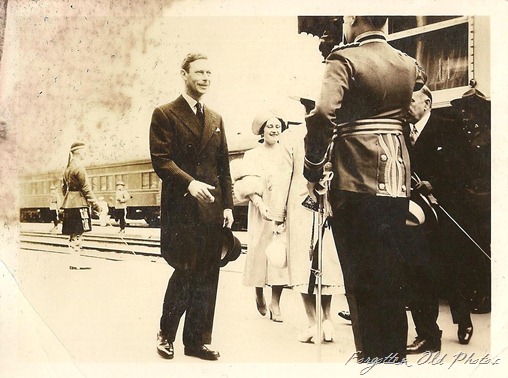 I purchased this photo in an antique shop in Winnipeg Manitoba Canada.  It looks like some Canadian Mounties guarding a train..and then there is the guy in the kilt.  It must be a welcoming ceremony.

Thanks for stopping by.  Do come again:)
Update:
Most of the readers say.
King George VI and the Queen Mother


More info from Iggy:
In 1939 King George VI became the first "reigning monarch" to visit Canada. During that trip, the King's consort, Queen Elizabeth, initiated the tradition of the "royal walkabout", though her brother-in-law, The Duke of Windsor (formerly Edward VIII), had when still The Prince of Wales in 1919 been frequently meeting with everyday Canadian people; as he said: "Getting off the train to stretch my legs, I would start up conversations with farmers, section hands, miners, small town editors or newly arrived immigrants from Europe."The 1939 royal tour of Canada was a cross-Canada royal tour by George VI and Queen Elizabeth. It was the first visit of a reigning monarch to Canada. It began 17 May 1939, and saw the royal couple visit every Canadian province as well as the United States and the Dominion of Newfoundland.
Posted by Far Side of Fifty at 4:10 AM