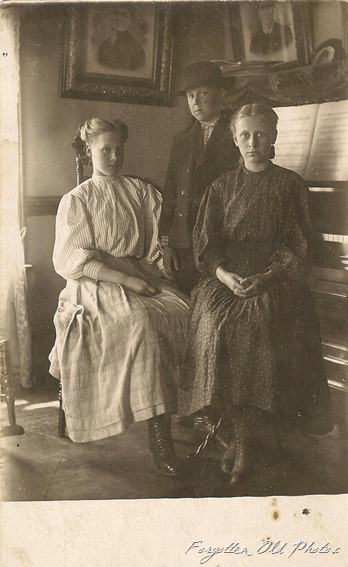 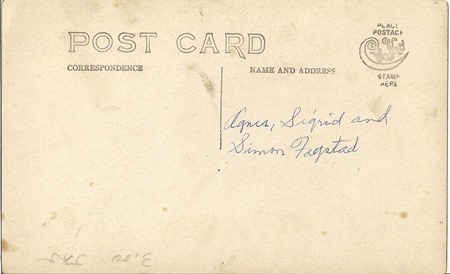 Agnes, Sigrid and Simon Fagstad or maybe Fogstad?
Thanks for stopping by.  Do come again:)

I don't know what became of Agnes.Sigrid married George Bang and remained in Grand Forks county, ND. She had a son named George Bang, Jr.

Simon married Lillian V. Jenson whose Find-a-grave record has some interesting details such as "They farmed in Agnes Township, Grand Forks County, near Niagara, N.D. ... They lived on the farm Simon's father homesteaded, until moving to Larimore, in 1956." and a list of offspring.

Update From Rex who is a relative.
Well I've not forgoten who Simon, Sigrid and Agnes were. They are my grandfather's cousins. He lived with them after his mother died when he was about 18 months old. This photo was probably taken at their farm home near Niagara, ND. I have photos of them at an older age. Simon had three daughters and I beleive they live in Illinois.Their parents were Ole and Martha Fagstad and the farm is still family owned and continues operation to this day. They came to this country from Norway. Ole and Martha are buried in the Elk Valley Lutheran Church cemetery along with other of their children.