Well lets look at some photos of places.  In this case it is a mystery place.   Perhaps one of my readers will know where it was taken at.
I purchased this snapshot in Winnipeg  Manitoba, Canada in an Antique Shop. 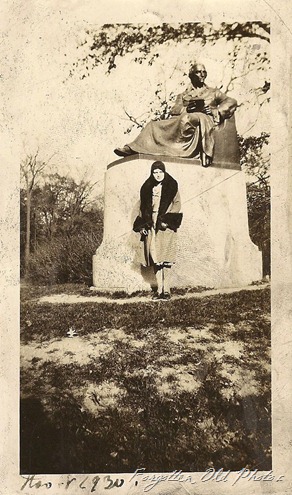 In the box of photos were many other photos that were marked Detroit, Michigan.  This one was not marked.

Update from Anonymous:
That photo was also taken in Detroit. That is a statue of Schiller that is on Belle Isle.


Iggy shares this:
The Friedrich Schiller (10 November 1759–9 May 1805) statue on Belle Isle in Detroit Michigan. This statue of the German poet and playwright was commissioned by Detroit's German-American community in 1908 at a cost of $12,000; the designer was Herman Matzen. Schiller's poem "Ode to Joy" was set to music by Beethoven in his Ninth Symphony.
Posted by Far Side of Fifty at 4:01 AM