Kari and Karl went home to relatives.   They are a double Full Circle. 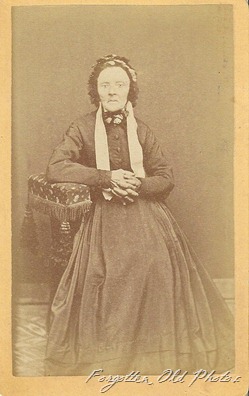 I emailed Tore after I found his contact info at Ancestry.  Turns out he is Kari’s Great Great Grandson and he also knows Karl’s Grandchildren.

He is some of the wonderful info he shared with me…

I believe this Kari would be Kari Knutsdatter, born at Bidsler in Nannestad Dec 26, 1803 and would be my great, great grandmother.

Kari married Jens Hovelsen, Slattum on Nov. 1 1832 and these two are the parents of Berthe Marie Knutsdatter Slattum, b Sep 28 1840, the wife of Otto Larsen Bjerke b Feb 2 1846, my great grandparents.

None of their descendants, nor descendants of Kari’s uncles or aunts emigrated to Minnesota - but the connection to MN could still be the Schow family.

Another day he wrote:

Kari died Nov 22 in 1887 at Slattum in Holter parish in the municipality of Nannestad.

You commented on her size. She and Jens were tenant framers and you can imagine that food was scares. Tuberculosis was not uncommon in those days and while I can not see that anyone at Slattum died from TB, it struck many families all around and malnutrition and close living quarters may have contributed to a difficult life.

I am not sure I have any stories - but I grew up with a large writing desk painted in faux wood grain and gold leaf inlay on our family farm in Nannestad, a writing desk/bureau with drawers and an upper cabinet. The initials of JHS, the husband of Kari, and the year 1786 . that would be his birth year -are painted on the upper doors. Unfortunately I do not have a picture of it and have set the earth in motion to get one taken in spite of it now is set in storage, - I just heard.

I am attaching a copy of a poor copy of picture of her daughter Berte Marie and her husband Otto. You also find a copy of the page covering Slattum in the Farm History book from Nannestad.

It behooves me to actually preserve the old pictures I can find on our old family farm Stensgård in Nannestad, Norway – and will do so on my next trip there.

This is Berte Marie and her husband Otto. 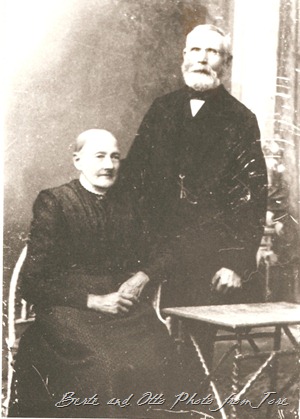 Then we talked about Karl

Here is a picture of his family grave stone located in Holter cemetary /parish in Nannestad. 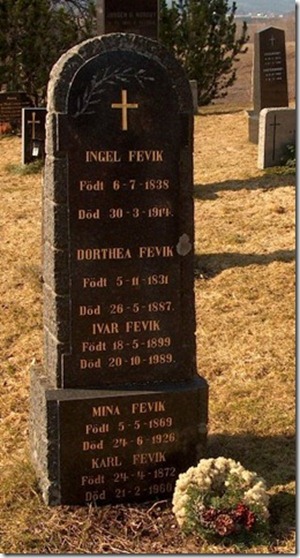 and had a son, named Ivar Fevik who died a bachelor in 1989. I don’t have any stories about Karl - but his son, Ivar was a well know story teller, woodsman and hunter. One of his stories is included in a booklet published by Nannestad Lions Club and is found on the internet here http://www.historier.no/index.php?option=com_sobi2&sobi2Task=sobi2Details&catid=7&sobi2Id=8776&Itemid=305

This story tells about a mischievous wood nymph, commonly called hulder in Norway and this is my translation of the story:

This happened during moose hunt one fall. I had no purpose being there, but I liked to wander in the woods anyway. When I came to Græssakervangen I saw smoke coming from the cabin chimney and I went inside.

It was Kristian and Thor Rovold and Karl Nordby that were there. They sat and drank black coffee laced with moonshine. They were not expected home that evening.
- Are you out hunting, you too? Kristian asked me.
- No, I don’t have anything to hunt with I replied. - there are no wild animals to find either.
- No, we have not even shot one single moose, he said.
Kristian used a double-barreled gun and round bullets. He gave me two, and I went on hunting at once. I wandered over Vard mountain but I did not even see a single moose dropping.
Soon I came to Raufjellet. It was beginning to become dim towards the evening. Suddenly my old dog hit on a hot sent. I was damned sure that there was a moose somewhere near. My old elk hound had managed to move way down the hillside, while the puppy, which was born in the spring, was further up the hill from me.
I go so excited, loaded a bullet in the gun and cocked it. Now I expected there would be money to be made. But the dogs’ trail lasted and lasted like the yearn on a spinning wheel. I could not help myself but had to get up an have a look because both dogs barked incessantly, and I was prepared to fire right away. But they did not come any nearer and I was staring into the twilight till my eyes watered. The moose must have been someplace near, - only I just could not see it. I got up to look over the blueberry shrub, - and there, - only 60-70 steps away stood an old woman. Then I began to wonder and I lowered the gun quickly. She had a red scarf around her head and a blue shawl tied around her chest and back, and she carried a walking stick.
I did not know what to do but I had to try to get hold of the dogs and get a way from there. That was not so easily done, for they growled and barked as mad. They dared, however not to go up close to her – even though she did not threaten them with the stick. It looked like the controlled them with her eyes. Finally I got hold of the puppy and looked for a while after another dog too, to get on our way home as fast as I could. But the dogs tore at the leach, - growling and barking wanting to return back to that place again. I really had to struggle to pull all I mustered. They were completely wild. To be honest, these elk hounds were useless in the hunt all that fall after this episode. If they came to the forest and saw a bush that was moving, they would snarl as they were obsessed.
At that time there was a little old folks home - boarding house - at a farm they call Trugstad - and is a five star restaurant for the well to do today in the modern days. There could be like that around seven, eight old people living there back in those days. I called there to speak to the host, Kristoffer. But there had ben none missing, neither by day nor night. No one from any of the other farms and cottages had been in the woods during the hunt as they all feared walking in the woods during the hunting season.
- Has anyone else seen anything up on Raufjellet? I asked.
- Oh, far from. It was surly no ordinary old woman this. It was a hulder, - a wood nymph - as sure as I sit here. The dogs know that too.

I know the grand children of Karl and will return the picture of Karl to them.

I mailed both photos off to Tore in Canada.

Yes, I received both pictures. Thank you very much.

I wrote to a member of the family of the young chap (descendants of his brother actually) to tell them the story, and I made a follow up call on the phone to Norway to see if the mail was received. It had been. I spoke with the wife of the person and she seemed to be quite interested, but I have not heard back from them at all. This may be their usual pattern as I once wrote the oldest brother when he was working and I know he had an email address - but there was no reply. It may well be that they are not interested in their ancestors or relatives.

The picture of my great great grandmother is included in the family archives.

Don’t stop what you are doing. Your efforts are much appreciated. Thank you.

Anonymous helped in connecting Karl with Kari.. Thanks for the research! Anonymous also left this information that explains the naming traditions.

About Norwegian naming conventions (from my understanding&recollection, so probably not 100% correct, but fairly, I should think):
In the old norse days (~1000 years ago), people got their surname from their father. If their father was named Knud, the son got the surname Knudson (or Knudsson or Knudsen), the daugther Knudsdatter. This is still practiced at Iceland today.
At some time one started adding the name of the farm where one lived. If you lived at the farm Slattum, you added Slattum to your name. If you moved to another farm, you changed your name. Before 1900, this was usually the case.
As urbanization increased (~100 years ago), an increasing number of people did not live at farms, and the practice became to inherit the father's surname. (This is probably also influenced by continental habits.)
This means that today, most Norwegians either have a name that ends with -sen (or -son) like Olsen (son of Ole), Hansen (son of Hans), etc., or a name of a farm (like Slattum). When people have a "farm name", it is in many cases fairly easy to find out where the name originates from.
Those rather few who has another type of surname (like the present Norwegian prime minister), are ancestors of immigrants (but the immigration could be hundred of years back