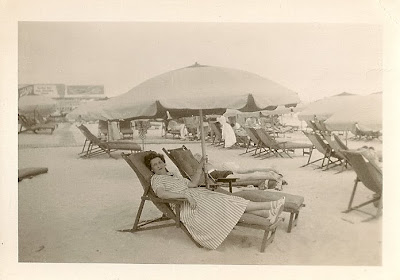 A lady relaxing at the beach..this is probably a photo from the late 1940's or early 1950's.  There is a Schlitz Beer sign in the background, suppose she had too much beer..probably not.  Our beaches here in Minnesota have never looked like this..it must be a beach out east on the Atlantic..or I suppose it could be the west coast beach on the Pacific..but it just doesn't say California to me.   New Jersey maybe?? Perhaps my readers have some input!
Thanks for stopping by, do come again:)

Update: Iggy found a viewmaster slide of Atlantic City..the signs in the background are very similar in 1957.  Thanks Iggy!
Posted by Far Side of Fifty at 12:13 PM