Far Guy and I met with some very nice ladies on Friday afternoon..relatives of people whose photos I have featured here.  They recognized the following photos. 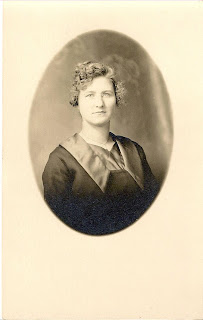 Photo Number 52
The ladies took these photos and a few others that I had not yet scanned..they were relatives..and another old photo of Bob and Joyce.  The ladies are cousins of Bob and Joyce which is Full Circle Four.
They have no idea who these photos belonged to originally, Marlys did say that it is her Mothers handwriting on several of them, but she has no idea how they ended up in the Antique Shop for sale.  We can only speculate that these photos were tucked away in some box or other container and they were not meant to end up in the Antique Shop.
They were very happy to get the photos, and I was very happy to lighten my load of Forgotten Old Photos.
Far Guy and I found it curious that their relatives were up here and then took off for Wisconsin and Nebraska, when all of our relatives ended up in this area because farmland was affordable. Their old place is about 50 miles from here, and Marlys the recipient of these photos is Graces daughter and she lives in Park Rapids, Minnesota which is our nearest "town".
Thanks for stopping by, do come again.  Follow the links to find out more about each photo:)
Posted by Far Side of Fifty at 1:03 PM