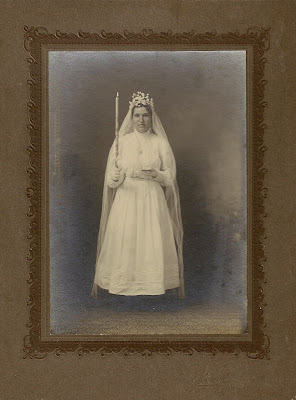 This is a photo taken by  J. Tessman at Wadena,  Minnesota..he was a photographer there in 1914.  Is this woman a Nun..or a Bride??  Since I am Missouri Synod Lutheran..I have no idea what the practices of the Catholic Church are. I am hoping that one of my readers will have an idea!
Thanks for stopping by, do come again:)
Update: Most of my readers say First Communion..thanks for the input! :)

Update: January 01, 2011
From Alberto: Some religious orders use to dress the postulants like a bride, when they enter to the novitiate. This moment, the Mother removes their bride veils and cuts their hair.
Afterwards, the postulants retire to another room, where they dress their novice new habit and sometimes remove their footwear. Returning to the church, the Mother imposes them the novices white veil, and sometimes a thorns crown on it.