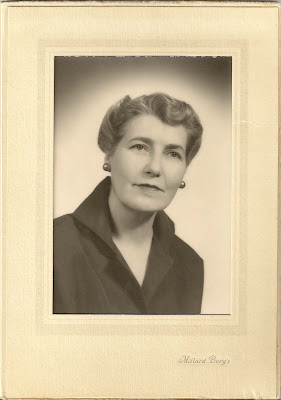 Alice Lomoe's photograph goes full circle today.  It is in the hands of her niece Julie.  I got an email from Julie yesterday...she wrote:
Hi Connie,
I'm writing to let you know I just picked up my aunt Alice Lomoe's photo at the PO Box today, and it's beautiful.


I truly appreciate your thoughtfulness. If you send me the link to your blog again, I'd appreciate it and would be glad to comment there. I may do a post about this for my own blog too, in which case I'll let you know. I'd love to quote you on why you do this and what you get out of it - either I can take something from your blog or you can send me something by e-mail. You've done more than enough already, though. My heartfelt thanks!


Sincerely,
Julie Lomoe
Here is the link to her blog.. Julie Lomoe's Musings Mysterioso
*****************************
Here is the history of this photo:
This is Alice.  This photo was more than likely taken in Superior, Wisconsin in the Superior World Theater..that became defunct and was occupied by  Millard Berg in 1958.
Shall we all guess at her last name.  Alice Lomoe?  Alice Lomne? Alice Lomone?
Thanks for stopping by, do come again:)
Updates from Abra and Norkio:
In 1910, Alice was just 1 month old at census time (born March 10, 1910). She has two older 1/2 brothers at the time; she is the first child from her father Oscar's second marriage (to Gunda). I didn't go back to see who his 1st wife is. She was married 8/10/1955 in Pine County Mn to Donald Mitchell. It is unknown if she had children. She died July 25, 2002, in Superior Wisconsin. There is also a scholarship in her name: Alice Lomoe Mitchell Scholarship.


Update : I found out that she was a long time teacher at Superior High School, Superior, Wisconsin.


Update from Abra:I wonder if this is Alice's teacher photo for a yearbook? I found a few more tidbits. Oscar Lamoe's first wife committed suicide in Itasca WI in April, 1905. I believe he married Gunda (Alice's mother) around 2 years later, as they were married 3 years in the 1910 census. Gunda's obituary is archived as January of 1964, age 82. I found Oscar as the master of the Itasca Free Mason's Lodge in 1925. On August 6 1910, at about 9 PM, Alice's 1/2 brother Orrin, age 10, was electrocuted while playing near electrical wires, which resulted in a negligence lawsuit against the Superior Water, Light, & Power Company. Alice had another older 1/2 brother Wallace, and a younger brother Orville. I found an obituary from 1970 for Mrs. Wallace Lomoe which gives a good deal of information on them & lists her survivors (Wallace & his wife were both in the newspaper industry ). I did more searching and found Wallace's daughter's blog; she is a writer out of New York. Perhaps she could tell you if Alice had children, or if someone in the family would be interested in this photo. I found an article on orville (Bud) Lomoe, who was a managing editor at the Duluth News Tribune. I also found an obituary for Orville's son, Richard who died in 1997. The SS Death Index also lists Wallace as dying in 1975, Orville in 1991, & his wife in 2009. I'll send links in your email. Amazing what one can find starting with a forgotten photo. :-)


Thanks Abra..great work now we will just wait and see! :)


Update, Monday April 26, 2010 from an anonymous reader..
What an interesing site. Alice Lamoe was our neighbor in Itasca_Superior, Wisconsin. She did not have any children. She continued to live in her mother's house until her death. She was a teacher, counselor, and dean of girls in the Superior School system and music director in the First Presbyterian Church. Her Mother, Gunda was our grandmother's, Olga S., best friend..


Update: April 27, 2010  From Alice's niece Julie!!
Hi, this is Alice's niece, Julie Lomoe. I'm a retired art therapist and a mystery writer living in upstate New York. Sue T left a comment on my blog post about my father, Wallace Lomoe, with a link to this wonderful site. I would dearly love to have this photo, and I'm thrilled to read all the comments about Alice and Gunda.

You are correct that Alice didn't have any children, but I spent many wonderful summer vacations with her at her cottage at Cranberry Lake south of Itasca and Superior. I have a box of memorabilia she had saved about our family that was passed on to me by my brother after Alice's death. She taught English and was a choir director well into old age. She was a warm, loving person with a good sense of humor, and a lover of cats.

I'll inevitably have to blog about this amazing find and the memories it stirs up. When I do, I'll let you know on this site. In the meantime, please visit my blog!


I will mail out the photo to Julie whenever she contacts me with her address!  I am just a pleased as punch to have another old photo going home :)
Another Update : August 19. 2010
Another message was left from a Great Niece:
Hello. Alice was my great aunt and wallace was my grandfather. I,too remember the house on the lake in Superior with Uncle Bud and a cat who was over 20 years old. Sha was incredibly kind and Bud seemed humorous. I was quite young but I know this woman was quite loved and admired. Lauren Lomoe-Thompson
Posted by Far Side of Fifty at 1:35 AM