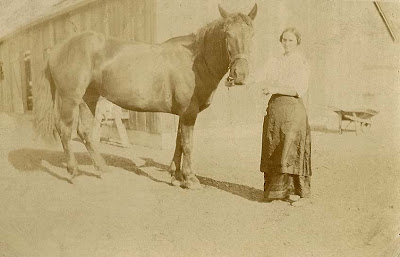 I am still working on the photos from Daves shop near Laporte.  This is a real photo postcard.  It is a Solio postcard from 1903 to 1920.   On the back of this card it has this writing.  "Does she look like a farm girl, her name is Emma Bohuslavicky."  I wonder if whoever wrote on the card..ended up with just the horse..or the girl too?
Thanks for stopping by, do come again:)
Update from Norkio:
Emma and John Bohuslavicky emigrated from Bohemia in 1893 and moved to Texas. John was a farmer. In the 1900 census, they had Robert (7), Emma (5)(This would be the gal in the photo!!)  and Anna (1). Also living with them were Rosa Roushal (50) a sister to John, and Annie Skolek (16) his niece.

The entire street appears to have many Bohemian families, according to the census. This was in Justice Precinct 3, Lavaca, Texas. Modern day Lavaca is a suburb of San Antonio and is not to be confused with Port Lavaca. The history of Lavaca County (http://www.tshaonline.org/handbook/online/articles/LL/hcl5.html) notes that a large proportion of immigrants in the 1890s were Czech speaking Bohemian, and the primary employment was farming, cotton production, and possibly ranching.

By 1910, the family has moved to Dent, Pottawatomie, Oklahoma, and has added Rosa as the youngest daughter. They are still farming.

Now, going further. Robert was born around 1893. I found a WW1 registration card for him, showing he lived in Oklahoma. He listed his birth place as Prague, which ties into the Czech heritage noted in the Lavaca county history. We find Robert next on the 1920 census, married to Rachael and living in Oklahoma. Note that Robert is 27 and Rachael is 18, much more common back in the day! Rachael was born in Texas, so perhaps she is from the larger Bohemian community there. They are farmers in Econtuchka, Seminole, Oklahoma.

I found Robert and Rachael in a family tree with six children all listed as living. Robert passed in 1962 and Rachael in 1979. There are numerous living relatives who would be Robert & Rachael's nieces and nephews, and possibly one of them could put us in touch with his children. I've sent a message to the tree owner and will keep you posted!