This is a photo from Al, he is one of my faithful blog readers.  Al also is a deltiologist..he collects postcards.  Of course he also runs onto photos.. he shared this one with me. 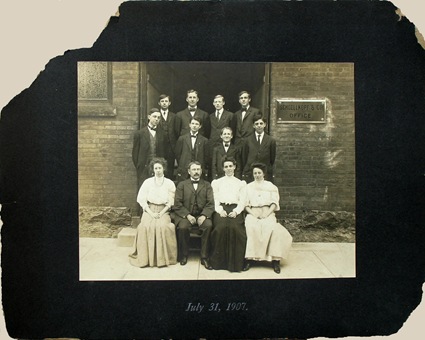 Hi Connie:
It's me again. I am sending you this photo because I thought since it is accurately dated as July 31, 1907, it may help you with dating women's clothing (and men's too, I guess). I found this photo in what I will call a "used everything" store here in Ontario and purchased it because I felt sorry for it! I tried to interest a couple of archives in Buffalo but received no response. I guess it will have to stay in the bottom of my drawer a while longer. There is quite a bit on the internet about Jacob Schoellkopf but here is a statement from the following site:
http://www.archivaria.com/BusDbusiness/BusDbios3.2A.html
Buffalo enjoys the distinction of having the largest tannery in the world in which sheep hides are turned into leather. This tannery is the firm of Schoellkopf & Company, the gigantic establishment at the corner of Perry and Mississippi Streets.
The factory was originally established by Lymburner & Torrey in 1862. In 1877 it was purchased by Mr. Jacob T.F. Schoellkopf, the prominent manufacturer and founder of the largest industrial establishment on the Niagara Frontier. The factory was reorganized under the name of Schoellkopf & Co. At that time 2000 skins were processed each day. The growth of the firm was phenomenal. By 1904 12,000 skins per day were being tanned. The factory produced all sorts of sheep leather for gloves, shoes, etc in all styles and colors.
I hope this can be of some use.
Al 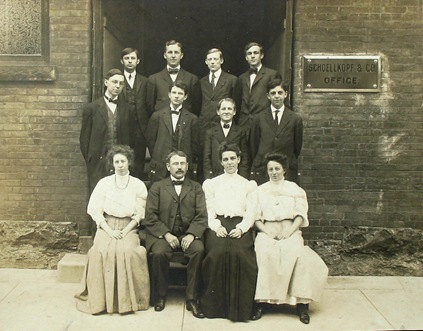 This must have been the entire office.  Three women and nine men.  I wonder if they were paid the same?
Thanks to Al for sharing his old photo!
Thanks for stopping by, do come again:)