The photo of Emma Norell found it’s way back to Kansas recently. 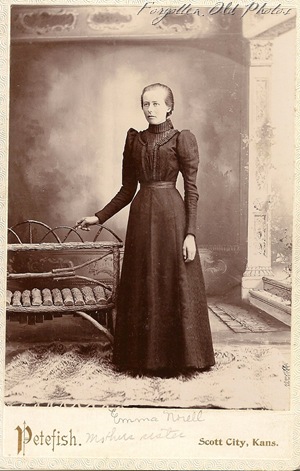 Iggy located a blog post that contained an obituary of a relative of Emma’s and a connection was made.

Hi Connie, Thank you so much for the picture.  As to the comment Emma Norell “Mothers Sister” I would guess that Emma sent this picture to her sister Anna in Wisconsin.  Anna had fourteen children and some live in Minnesota.  Probably one of the children made this notation when identifying who Emma was.  This picture didn’t mean anything to later generations. ( The photo is marked Mothers Sister)

All the Norell family ( Peter and Christina, Erik, Magdalena, Christina, Emma and Peter) came to Kansas except Anna  who stayed in Minnesota and married Aaron Peterson in 1880 in Lake City, Minnesota and Olof John who followed the family as far as the Dakota Territory or Nebraska. A son Sven was born in the Dakota Territory and died two days later.

The family has some of this picture but gladly would take more to share with the family here.  I’m enclosing a special picture of myself and my sister with Emma “Auntie” Norell.

During World War II in 1943 families living in a 340 square mile area of Gove, Logan, Lane and Scott Counties in Kansas had to move out of this area.  The land was used as an Arial Gunnery Practice Range.  This spread the family apart.  Some moved back after the war and others stayed where they had moved to.

Keep up the good job of saving family history pictures. Thanks!  Darlene

PS Enclosed is a check for $20.00 I appreciate all your efforts. 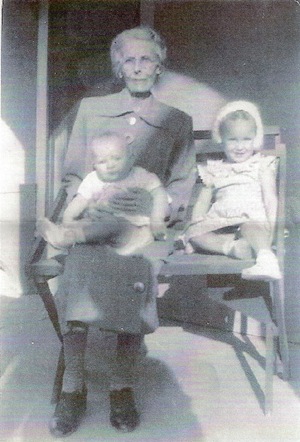 This is Emma Norell with her Great Grand Nieces Marlene and Darlene in late 1954, Emma Norell died March, 02 1955.

Thank you Darlene for sharing this photo..it is so nice to hear about the people that are featured, and to see what they look like in later years is a real treat.

I do not charge anyone anything for individual photos, however if someone sends me some money..I turn around and buy more photos that have names on them!