I featured this photo back in August of 2010, I was contacted by email on January 08, 2011 and I put the photo in the mail shortly after that. 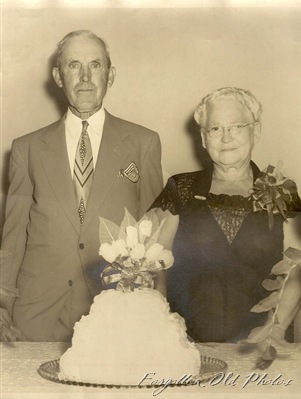 I mailed the photo to Glenny in Virginia, Tom and Helen are her Great Grandparents.  I didn’t hear back for her for quite some time..finally I emailed her!  …now get ready for some real stories..this was a real treat for me to read.

I am so sorry I haven't responded to you!

I received the photo and the family is thrilled! Thank you so much again!

After some discussion with other family members a flood of memories came back of "Mammy". Unfortunately I don't remember "Pappy" myself, but I am told he was a good, hard working man with a great sense of humor . They lived in Cannon County Tennessee their whole lives. The farm they raised their family on was taken over by my Uncle Joe. He built a home for himself and his wife there and the cabin Mammy and Pappy spent their lives in was left the way it was when she passed right down to the rocker she would sit in on the porch to snap beans.

I remember visiting them at the farm and Mammy telling me stories about the mule, strictly to make me laugh ... she thought it amusing that I was so fascinated by the animal. She would also sneak her grand-kids teaspoons of brown sugar as a special treat. They were wonderful people and all of my cousins and siblings now have a copy of this photo and will treasure it.

I believe you are correct in thinking this is the 50th wedding anniversary photo, although my aunt insists it's the 65th ... there is just no way they were able to celebrate their 65th. The amazing thing is that I have a photo of my grandmother and grandfather's 50th (Tom and Helen's daughter and her husband, Mae and Therman Campbell) and they are in the exact same pose as Tom and Helen's with a cake that is very similar. And I am told that the celebration was held in the same building.

I have been working very hard to find out more about this side of the family and have not been able to get any further in the family tree than Tom Ford. I cannot find anyone in the family that can tell me the name of his father. There have been rumors that have circulated through our family as long as I can remember that his father was a brother or cousin of the famed Robert Newton Ford. Robert is the man who shot and killed Jesse James. And there is even a weapon that has been passed down that is rumored to be the gun used in the shooting. I have been able to find nothing at all to prove or disprove any of it. Family has told me that I haven't been able to find anything because the family was ashamed of this particular branch of our family tree. Seems my great grandparents didn't want to be known as relatives to the "coward who shot Mr. Howard".  I know that you have some experience with genealogy work so if you could help me with this, I would greatly appreciate it.

The gun has now been passed down to my son, and I would love to be able to tell him the truth about the story ... my siblings and I think that maybe our father let the rumors run true because he loved the idea of it and told that story of this gun just to impress us and then my son. My father passed away in 2009 and my son was thrilled to have been left this family "treasure".  And I guess, no matter what the truth of it is, it will always be a treasure to him. He is my father's only grandson and loves that my father thought so much of him that he would leave it to him.

Thanks again for this wonderful photo and for everything.

One mystery sometimes leads to another…we will see how this one unfolds.