This is a photo that I got over at an Antique Mall in Detroit Lakes, Minnesota. 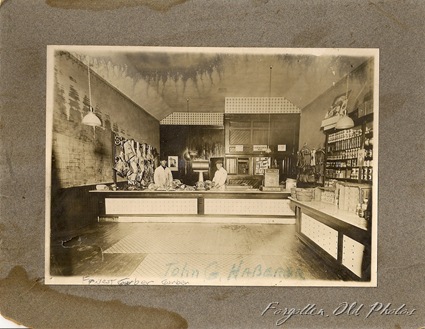 It is in terrible shape, and it was 4 dollars.  It is a Butcher Shop in Park Rapids. Minnesota.  I live near Park Rapids so this photo was very interesting to me.  Of course I am too young to remember this old shop.  I spoke with a few old timers and they think that this was on the west side of main street on the second block..perhaps where the old Melville's Store was located..now it is a tourist shop of some kind.
John G Haberer was a resident of Park Rapids, he married Mary Stella Potter.  They had a son named Ted, who I met at church, he died in 2009.

I have not had time to research the name Ernest Gerber.  I think that perhaps Ernest and John are the two gentleman that are in the photo…but I am not certain. Did one of these gentleman own the Butcher Shop?

On the way back wall is a poster with a cross on it, right behind the man on the left.   There are three other signs, one I cannot read, one says Cash Customers here and the other says something about Deliveries.  They sold something for 50 cents, and have many of the meats out on the counter..I suppose for the photo.

Johann Georg (John G.) was born June 14, 1891, in Hubbard County to Mr. John and Dorthea (Dora) Sour Haberer. John G.'s father was a blacksmith who moved to Minnesota in 1884 from Germany and to Park Rapids in March, 1887, where he opened a blacksmith shop. He served on the village council and was reelected on November 26, 1890. In 1889 services in St. John's Evangelical congregation were held at the "Detfach School," four miles west of Park Rapids, but the congregation later used the hall above John's blacksmith shop.
Posted by Far Side of Fifty at 4:18 AM