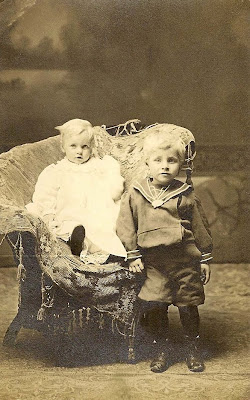 Look at these little boys!  I say boys..because a a general rule boys hair was parted on the side.   This is a real photo postcard, it is an Azo with Triangles in the corners..so that means it is from 1904 to 1918.

I did a little research... curiosity..I ran across the word "breeched". In the late 1800's It seems that both girl and boy babies were kept in dresses.  They also wore white frilled lace pantalettes under their frocks that covered their legs to their ankles.  Between 3 and 6 years of age, the boys were breeched and put in tunics or smocks. In the late 1800's Little Lord Fauntleroy suits, Buster Brown suits, kilts and Sailor Suits were worn by little boys.   1900 to 1920 rompers were popular for little boys along with sailor suits.  Little boys also wore  knickers and at about age nine or ten they got long pants...which was viewed as a  rite of passage.

In this photo we have a sailer suit and knickers, typical little boys clothing worn 1904 to 1918.
Thanks for stopping by, do come again:)
Posted by Far Side of Fifty at 1:02 PM