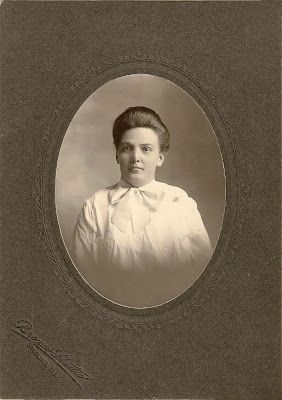 This is a South Dakota/Illinois Photo of Edith Hermes taken at Brown Studio in Sterling, ILL.  Tomorrow I  have another photo for you to compare with this one..or maybe my imagination is working overtime.  I will venture to say that this photo was taken around 1910.  She looks like a school teacher to me..it would be interesting to know more about her.

I missed posting yesterday on this blog..the day just got away from me.
Thanks for stopping by do come again:)
***Update
From Norkio :Edith Hermes was one of four children born to Anton (or Anthony) and Margeret Hermes in Hamilton, IL. Edith had one older sister, Kate, a twin sister named Mayme (or Mary on later records), and a brother George. Edith and Mayme were born in September 1880, Kate in 1869 and George in 1878. My guess is there were some lost children in between Kate and George. In 1900 Anton's brother George was also living with them in Hamilton, he was 52 years old at that time.

By 1910 the family had moved to Whiteside. By this time Anton was 77, Margeret was 65. Kate and Edith were residing with their parents still and there is no employment listed for them.

In 1920, Edith and Kate were residing in a home they owned, possibly their father's, and had taken in a boarder named Philip Peters. Edith is listed as the head of the household.

In 1930 they were still in Whiteside, Edith and Kate lived together. They both were listed as single on each census record.

BUT there is a marriage record for a Kate Hermes in South Dakota in 1918 to August Koerber. It's possible he passed away and Kate returned to Illinois to live with Edith. This would be a clear South Dakota connection. The dates/ages are fuzzy here because the marriage license has Kate 5 years younger than the census records. Maybe she lied about her age, August is younger than her on the license. :-)

Here's some more interesting information. Mayme married Matthew Hermes (yes the same name, cousins??) in 1904 at the age of 24. She and Matthew lived in Aurora IL and he was a cigar manufacturer by 1910. They had four children: Cacilia (or Carcelia, hard to read), Elmer, Raymond and Arthur. There's no information on the 1920 census about them, and by 1930, Matthew was 60 and retired, Mayme was 59, and their son Elmer was living with them. He was a dentist and also a veteran of WW1. Elmer died in September 1972 at the age of 83.


Update from Connie:
Ok here is some more to chew on.  I wonder if the Phillip Peters that is the boarder in 1920 with Edith and Kate is the same Phillip Peters who is the father of Margaret Peters Bauer ( Photo number thirty-nine.)