Well I was sure that the Edith Hermes from yesterday had married..I thought that this might be her. 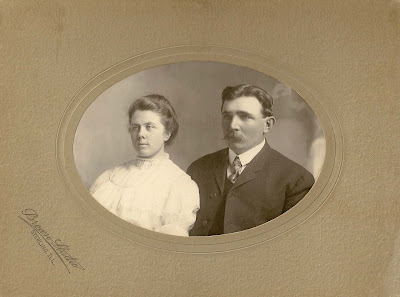 Apparently not.  Edith Hermes  from yesterday never married.  On the back of this photo is written  Edith Hanson or Hinson Mikeel or Mekeel..  This is more than likely a wedding photograph..I think it was probably taken around 1911.  I picked that year simply because my paternal grandparents were married that year and the clothing and the setting is very similar.

Tomorrow the Hermes saga will continue, I have a photo of the Hermes children.

Thanks for stopping by, do come again:)
Update***
We will change the date of this photo to 1905 and also note that it is Edith and Anson Meekel!! Connie

From Abra:  It looked to me like it said Edith & Anson Meekel, so that is I went in search of. Anson Meekel was born in about 1875 & living in Harmon, Lee county, Illinois in 1880. In 1900 he is living with his sister Priscilla. In 1910, he is in Kersey, Weld County,Colorado, and married to Edith for 5 years at this time. There are no children, but Edith's father, William Firch is living with them. In 1920, they are in Crow Creek, Weld County, Colorado--no children. In 1930, they are in Kuner, Weld County, Colorado. I couldn't find any pre-marriage information on Edith. I did find a family tree with Anson's information, so I did send the owner of the tree the information on your site.


Update** For what it is worth, Anson is still in Kersey, Colorado in 1945..that is the year that his only brother Arthur Mekeel died.  In his Obit his parents are listed as Solomon and Priscilla Mekeel.  I also found it interesting that an Arthur Hermes was a casketbearer for Arthur Mekeel.  I guess there is a difference in the spelling of the Mekeel name also.  Connie:)


Update: August 15, 2010 from  a reader.
The woman in the photograph was born Edith Madison on July 11,1880. Edith's mother died when she was only three. Her father was overwhelmed with bringing up five small children, and he tried to find homes for his children with other families. Edith was adopted by Mr. and Mrs. Fairclo of Sycamore, IL who had been childless. Edith used the name "Fairclo," but remained very close to her four Madison brothers and sisters.

Edith married Anson Mekeel in December 1904, and they started their married life farming in Northern Illinois. In February 1910 they followed Edith's two brothers to northeastern Colorado. They farmed in the Kersey area east of Greeley for many years before moving into Kersey in 1944.

Edith and Anson were childless but were remembered fondly by their nephews and others who knew them. Thanks for finding and posting a lovely photograph of a fine couple.

And as an aside... Edith had a twin sister, Ethel, who was also familiar with the Mekeels, including Anson's brother Arthur. But the spark that brought Edith and Anson together never animated Ethel and Arthur. Ethel never married and eventually moved to Colorado. Arthur waited until he was nearly 64 to marry in December 1926.
Posted by Far Side of Fifty at 1:09 PM