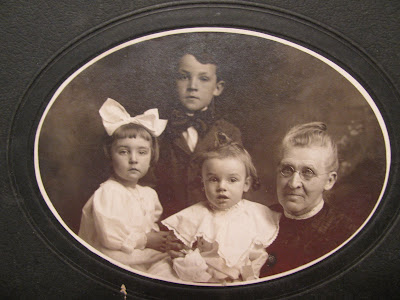 Photo Number 103,  Mrs. Walls, Ambrose, Mary and Hugh Hermes.
This photo is going home.  The little baby boy in this photo being held by his grandmother is Hugh Hermes, his granddaughter ( Julie) contacted me, and then his daughter ( Jeanne) .


Jeanne wrote,
I just talked to Julie and she sent me these pictures - this is so exciting, I love your wonderful past time of reuniting photographs with family!  Picture 103 is my grandmother Mary Wall (or it could be Walls) who is holding my father Hugh Hermes.  Older siblings Ambrose and Mary are also in the picture.  You have already found this out with your skillful sleuthing.  My Uncle Ambrose married Louise had five children (Thad, Mary Louise, Joe, Maureen, and Agnes) and was a farmer in Rock Falls, Illinois but was also in real estate in later years.  My Aunt Mary was never married but took care of my Aunt Frannie who was afflicted with multiple sclerosis.  Mary was a real estate and life insurance agent out of her home.  My father married Mary Elizabeth O'Neil and raised seven children (LaRita, Ed, Rosemary, Steve, Jim, Jeanne and Bill) in Sterling, Illinois.  They also lost a full term baby named Hugh Robert in between Rosemary and Steve.  My father was a farmer all of his life but attended college at St. Mary's Kansas until he was called home during the Depression to help on the farm.  He devoted his life to family and the farm.  There were several children to follow the birth of my father not pictured in photo 103 - Agnes, Joseph, Frances, Rita, Anastasia and Helen.  Agnes was a Carmelite nun for over 50 years.  Joseph married Pauline and was a farmer who had nine boys.  Frances died of MS at 42.  Rita also became a nun but later left the convent and married Willy and never had children.  Anastasia married Bob Brennan and had nine children, they lived in Waterloo, Iowa and Prairie du Chien, WI.  He managed a beef packing plant.  Finally, Helen married Jack Conway and had ten children.  Jack was CEO of Northwestern Steel and Wire Mill in Sterling, Illinois.

is my grandmother's sister (the baby Hugh's Aunt Mayme).  As your records show she was a twin to Edith (picture 101).

Edith Hermes Photo Number 101
I called my sister to try to find out some more information and what LaRita said was that Anton Hermes left Margaret Hermes at some point in the marriage which might explain why the photo of her says Mary Walls instead of Margaret Hermes.


Since its getting late I'm gonna send you this because its all I really know.  Thank you for sending the photos.  Helen and Anastasia are the only surviving children of Ed and Agnes Hermes but I will be calling them to share the good news.

I sent her a list of all the South Dakota/Illinois names..

Connie,
I recognize nearly all the names you listed from listening to my parents growing up.  Some of them I knew first hand like the Bauers, Ackerts, Foleys, and Makeels.  I found out from Rosemary that our grandmother was a "Walls" plural btw.  It is ok to copy and paste what I wrote except do not hold me to the accuracy, as I was the 6th of 7 children if you know what i mean.  This has been a great experience for me just thinking of the "family" that came before us.  Thanks for the genuine interest:)
Jeanne

Today I am heading to the post office , I am sending off all three of these photos to Jeanne, if a closer relative of Maymes or Ediths turns up..I am sure that she will share.  I will share Jeanne and Julies email addresses with Jinglebob since he was the one who shared these photographs in the first place.. Full circle connections..sharing connections.  Today is a good day on The Forgotten Old Photographs Blog! :)