Well we made it to 50 Full Circles! This photo first appeared on August 16, 2011. Sometimes these reunions do not happen overnight.  We have to be patient and hope that relatives are always looking. 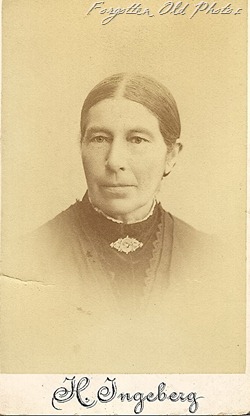 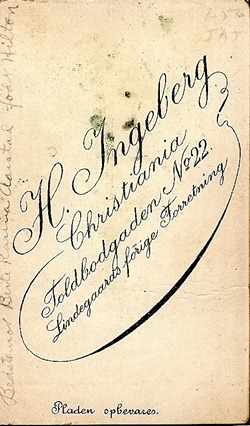 Hello ! This is the Grandmother of my Grandfather Anders Aarstad. I have never seen her before in a picture. And all the information above* seem to be correct. This was really great ! Best regards from Norway! Liv

Update from Anonymous:
Hilton is not a very common name in Norway, but definitely Norwegian. The Hilton farms can be found at Kløfta, just north of Oslo.
My guess is that Bert(h)e Karina(/e) is this woman: http://bit.ly/oz0zlC.
If that is true, then we have a connection. Berthe's brother is Halvor Nilsen Hilton, whose son is Augustus "Gus" Halvorson Hilton, who moved to USA and married Mary Genevieve Laufersweiler. They had 8 children, among these Conrad Hilton (1887-1979).
Conrad Hilton started the hotel Dallas Hilton in 1925, and I guess you know where it leads...

Kløfta is a place in the municipality of Ullensaker (in Akershus, Norway).
Ole Olsen Aarstad was the goodfather of August, mentioned above.

I contacted Liv and she wrote:

Hello again. All my relatives are long gone, and my grandfather was never close. So unfortunately I have no stories or information about her except what can be found in public registers. My husband and I are going to the Midwest this summer. He has a lot of family to visit in Minnesota and Montana, and I am trying to find relatives of my own, but no luck so far. But I am certain that my grandfathers uncle, Ole Olsen Aarstad b. 1872 became an us citizen. He was probably in possession of this photo of his mother. I can't find other possibilities and I can't find that he had children, either. But I will continue searching, and if I can do something in return, please let me know. It's very nice of you to mail me the photo. Liv

I told her that we were having a winter storm and that I would get to the Post Office soon.

Hello Connie, you're having a winterstorm ? This time of year we usually have cold weather, but today we were outside in the sun in our T-shirts drinking coffe. It is nice to feel the spring, but I'm afraid change will come. Maybe I can send you some norwegian mittens in return, it will take some time to knit them, but they will be ready for next winter. Liv :)

I mailed off the photo.

Hello Connie, Thank you very much for the photo of my grandfathers grandmother.  My grandfather and grandmother were married just long enough to make two children, then my grandmothers family decided that he wasn’t good enough and they got a divorce.  This happened in the 1930’s and my grandfather didn’t see his children until they were adults.  A divorce was unheard of, my grandfather was out in the cold, and we never got to know him or hisw side of the family.  My father is dead, but my aunt, 82 years old this year, told me that my grandfather and grandmother met once in a tram in Oslo many years after they divorced, and they ran to opposite sides of the tram, and didn’t give each other another look.  It was such a surprise to find a photo on the internet, and better to actually have the photo to show for generations to come.

I hope you like the mittens,  I had some coins left for you to buy some stamps.  Give my regards to your partners and good luck with future projects!  Liv

I bet you are curious about the mittens??  They are beautiful! 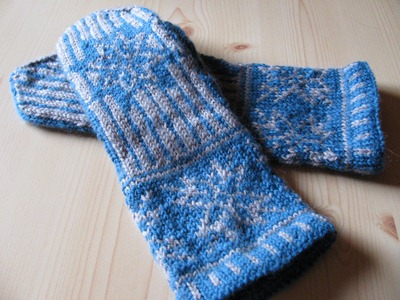