Kust Ojala went home to Wisconsin to a cousin.  His cousin Trica shared this information about Kust.

He was born in Finland in 1880 and his family came to the states within the next 2 years. The only other thing I know about him from family stories is that he was a big man and went to 'Dakota' to harvest. He went to a saloon one night and drank himself sick. He never recovered, and he died at 33 years old. I don't think he ever married, but I am still sorting out the family tree. Who knows what I'll find! :)
Thank you so much Connie!
Tricia 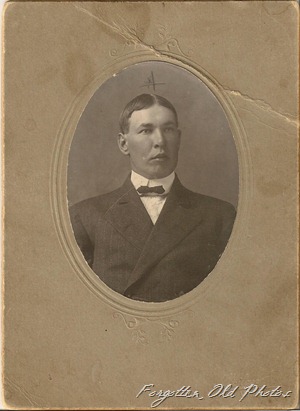 Trica wrote that she got the photo in the mail.

Thank you so much for the picture! We really don't know much more about him, other than the little I shared. I believe he had 9 siblings. Half were born in Finland, the others in MI, MN, and SD. The laptop that has all my notes broke down recently, but when I get that up and running again I will tell you what else I know. Oh - I do know that he is not the Gust that married Elsa. He would have been 10. He has an uncle and a cousin or two that are named Gus also. If I figure out who married her, I will let you know that also!

It is always good to have a photo go home.   Thanks for stopping by, do come again:)