This full circle was really fun!

The photo you have is of my grandfather Irwin Walter Dietrich who was born in 1891 in Berks County, Pennsylvania. The handwriting is my grandmother's, Katie Eva Bierman Dietrich. They lived in Kutztown, PA. My grandmother also wrote "Annie Banner" on your photo 466, however I have no idea who Annie Banner was.

I cannot tell you how emotionally overcome I was to see my grandmother's handwriting on your web page. I recognized her script instantly, especially the distinctive D and I, then I ran to get my letters from her and held them up to the computer screen to compare. I've had some happy poignant moments tonight reading her letters to me.

Thank you for posting the photo, which led to my reading the letters I saved for decades. It has inspired a lot of memories and thought and emotion this evening. It also is a wake-up call to me to scan the letters and photos that are really important to me.

P.S. What a mystery that the photo ended up in Minnesota! 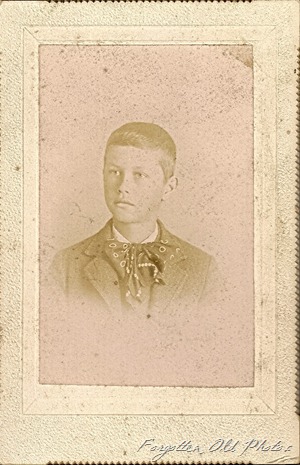 The mystery continues with Annie Banner and Clara Adam both are written in the same hand.

Cecelia is researching both of these ladies to see if she can find a connection to her Grandmother.

Anyways I mailed off the photo.

Irwin Dietrich's photo has found a home! Thank you so much for your wonderful website and collecting old photos to find homes for them. It is marvelous that we live in the Internet Age which facilitates these reunions.

Irwin Dietrich was born in January 1891 in Berks County, PA. He married Katie Eva Bierman in October 1916, at St. John's Church in Kutztown, PA. They had five children together, and later divorced. Irwin was a teacher and later owned a pet store. He died in Arkansas in 1964.

Irwin's smartest move ever was to marry Katie Eva Bierman Dietrich - she was a fantastic cook whose potato stuffing and wonderful edible cabbage delicacies are fondly remembered by all her grandchildren. Katie doted on her grandchildren, she had beautiful handwriting and always sent Valentine's Day cards and Birthday cards and encouraging letters to her grandchildren. She lived to see her first great-granddaughter. Her favorite movie was The Sound of Music, and I thought of her as Christopher Plummer (Baron Von Trapp!) finally won an Oscar and made his Academy Award acceptance speech last week.

Irwin's male descendants have read the nice comments posted by early viewers of the photo on your website, and all are flattered and claiming a family resemblance.

I am attempting to locate homes for the other photos inscribed by my grandmother.

I was very pleased that Cecelia emailed me.  She found the Forgotten Old Photo through a search. That is what encourages me to keep going, sooner or later someone will end up here to claim a photo that has a name.

I will mail these photos when a connection has been found and write more Full Circle posts!