This is a Cabinet Card from the Antique Shop In Bemidji Minnesota. 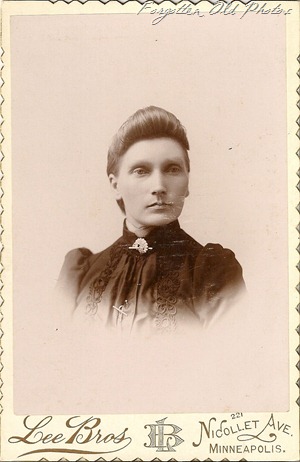 Lee Brothers was at 221 Nicollet Ave from 1889 to 1892. The Lee Bros had five principals.  Peder, Thorwald and Martha Lee and Clifford Trudell and Frederick Rowe. Apparently they were quite successful for many years.  Their entire collection of photographs was donated to the Minnesota Historical Society.
This lady looks very serious.  I wonder if anyone out there knows if a special form was used to make her hair so poufy in the front? 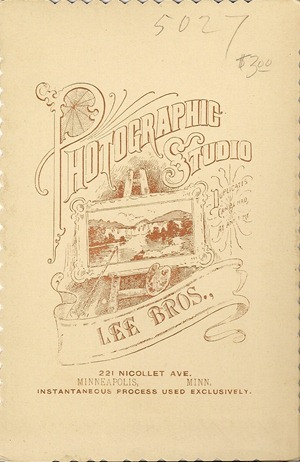 This is the back of the Cabinet Card.

Update from Whowerethey:
she most likely used a rat, which was a pad women made from their own hair. The hair was pulled from brushes and stashed in a hair receiver on the dressing table. These look like little squat vases. When the receiver was full, the hair was removed and bound in net into the shape that was desired. Once made they were used to pad and fill in hair styles that were puffy. They were fastened into the hair with hair pins. Women could also buy false hair from magazine advertisements, like in the back of Godey's or Peterson's.
Posted by Far Side of Fifty at 4:06 AM