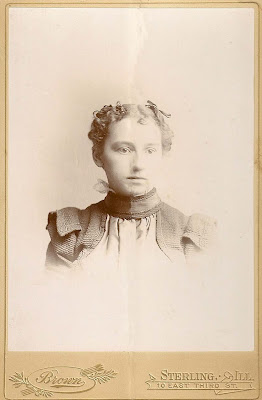 This is Louise Neitzke..she is more than likely a cousin to Dorthy Porbs from yesterdays photo number Seventy- five. (Louise's sister Francis went to Chicago with Dorothy to work as a stenographer.)  Apparently Louise being the oldest daughter stayed in Sterling and worked there.  Louises parents were William and Fritzie Neitzke. 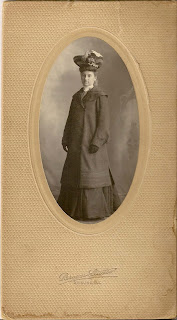 I featured Louise in a previous photo  ( number twenty-seven)..  Remember her..the gal in the coat and hat.  Norkio found out that she was born in 1882...and worked as a maid.  I dated this photo as 1897.


Todays photo might be a little bit later..it is a cabinet card and might be from around the year 1902..she would have been twenty years old then. It is very interesting to me to find out how all these family puzzle pieces are coming together.
Thanks for stopping by, do come again:)
Posted by Far Side of Fifty at 1:16 AM