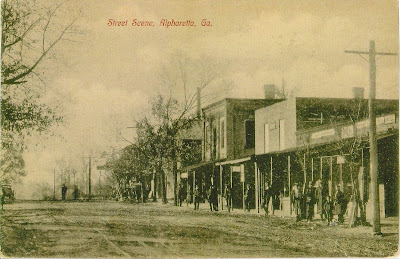 Mildred was so kind to mail me a couple of old photos. She wrote..

What is now Alpharetta, GA (my hometown) was located on an Indian trail between the north Georgia mountains and the Chattahoochee River.  Originally called New Prospect Campground, it consisted of a trading post with tents, a log school, and farms (mostly cotton).  During the 1900's, my great grandpa owned a huge farm where our regional hospital is now located.  Unfortunately for my great grandpa, he lost everything in the Depression.  He worked hard until the day he died when he was kicked by a mule and died from his injuries - I was two (1959).  He is credited with saving the lives of two young sisters from a fire at the local hotel during the early 1900's, where he received burns on his face/hands. 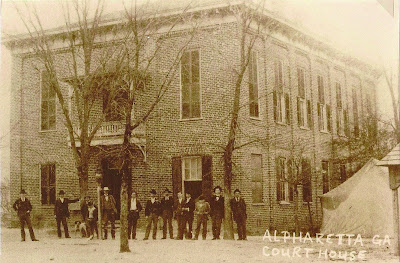 In 1857, the town was named Alpharetta meaning First Town.  By the Civil War, Alpharetta had built a courthouse/jail for $2,400, 3 hotels, several mercantile shops, churches and a school.  Cotton was the biggest crop for the many family owned farms and very few of the farms owned slaves.  Alpharetta was virtually untouched during the Civil War.  The next town, Roswell, had a large cotton mill and railroad and sustained much damage during the war.

Alpharetta's population today is around 50,000 people.  The downtown street scene I am sending you still has many of the same buildings as in the photo.

Thank you Mildred for sharing your photographs with me. I found the history behind them very interesting. It looks like both photographs were an event..with the number of people standing on the edge of the street. Mildred has a blog called Mildred's Menagerie...she is one of my most faithful readers and almost always leaves me a comment..Thanks Mildred!