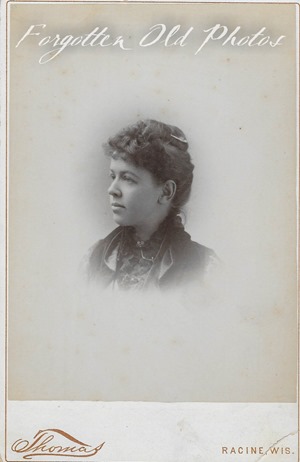 Thomas was the photographer in Racine, Wis. 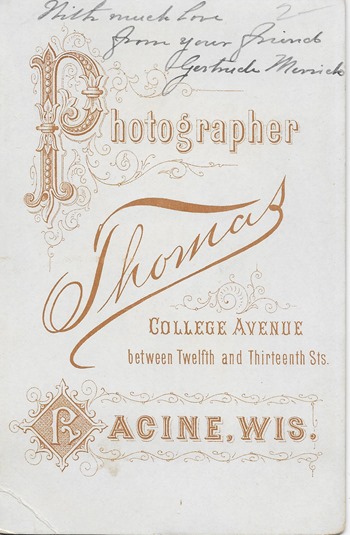 With much love from your friend Gertrude Merrick
Thanks for stopping by.
Update from Iggy:
She never married, was born Feb 4 1862 in Boston, taught music in Racine 1894-1901,and later lived in Illinois.
Her parents were William Marshall Merrick and Sarah Kettelle Merrick,Gertrude had a brother, Arthur Tyler Merrick (15 Nov 1863 in Wilbraham, Hampden, Massachusetts) who had two sons, Eyles Cadvan Merrick and Lester Cydafael Merrick and a daughter Marjorie Evelyn Merrick all of which lived in the NYC suburbs.

I tried to post some info on your blog about the above photo but got an error message something about an incorrect character in my ulr?  Anyway about the photo, the Merrick’s and my greatgreatgrandparents , Joel Barber Cloughs, were good friends.  The Merrick farm was in Wilbraham, Mass., Joel Clough was from a nearby town, Palmer.   Joel attended prep school at Wilbraham and it is likely  during this time that they became friends.   Joel went on to become a civil engineer , William Marshall Merrick became a skilled artist, draftsman, and map maker,  both became involved with the railroad.     In the period leading up to the Civil War both men were in the south working for railroads at times for the same line and place so even at this time they might have been working with each other but I have no direct evidence of this.    When hostilities broke out Joel and family fled North and oddly to Minnesota.   Soon after fleeing North Joel was asked to come to Virginia and work for the US MILITARY RAILROAD, which he did he was in charge of construction and reconstruction of the railroads  in Virginia.   Shortly after taking his position he sent for William Marshall Merrick.  Merrick put his skills as  draftsman and map maker to work for the USMRR and the Union.   In 1864 because of declining health Joel left the USMRR, at which time Merrick using his great skill as an artist and draftsman produced a fantastic  testimonial for Joel and it is a work of art.  William Merrick stayed with the USMRR until the end of the Civil War but by 1868 he and his family were located in Lawrence, Kansas he was working as a draftsman for the Union Pacific Railway, Eastern Division.  I know this because I have a letter William sent Joel June 27, 1868 from there.     Some additional information- A collection of sketch books made by William Merrick are located in NY Library I think there are three or four books,  two contain sketches William made during the Civil War period and I have seen those the others I am unsure about. I saw in your bio you have an interest in photography so you might find this interesting.  At the same time William Merrick joined Joel at the USMRR, Joel was assigned a photographer, he was Andrew Russell, he is not only well known for his Civil War photography but after the war he went to work for the Union Pacific Railroad and took the famous photograph of the two engines meeting cowcatcher to cowcatcher during the golden spike ceremony at the completion of the transcontinental railroad.  During the time that Merrick and Russell  were together at the USMRR they may have become friends  as Andrew Russell appears in at least one of Merrick’s sketches and Merrick appears to be a character in several of Russell’s  photographs.     It was interesting to see that you live in Minnesota as I mentioned above that is where Joel and family fled , they first located to a farm in the area of Hopkins Station but when Joel went to Virginia his wife and children moved into Minneapolis and he returned there.  They maintained both the farm and the house in Minneapolis until his death.   He built several railroads in the area and twice was the city engineer for the city of Minneapolis.  In the early 1880s he went to work for the Northern Pacific Railway was in charge of its construction for a good bit from Minnesota to Montana.  He died in Helena Montana in the late 1880s still building for the NP.   Would it be possible for you to email me a copy front and back of the photograph # 2108, Gertrude Merrick and if what I have said above raises any questions or curiosities ask away.
Thank You
Jim