This Full Circle began when I left a message at Find A Grave.

Thank you for your email. It was quite a surprise, as that I have very few photographs of my Jobes family.  I have no doubt that it is Charles Wesley Jobes, my grandfather's first cousin. I would love to have the photograph. What would it take to obtain it?
Sincerely,
Michael 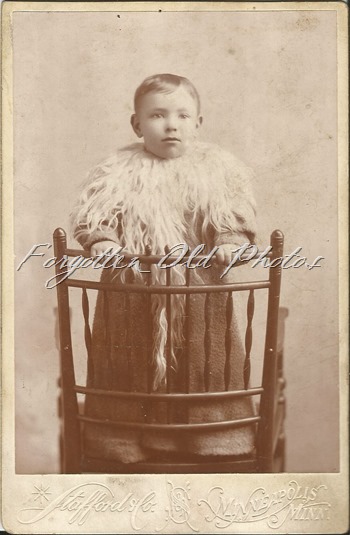 I mailed the photo on August 10 2015.  I know that Michael was very busy taking care of a very ill parent.

In the meantime I wrote this:

Hi Michael,  I have a photo of Sarah Martin I believe she is Annie May Martin Jobes Mother.  OR Charleys Grandmother.   Sarah was a Pryor, I also have some photos of the Pryor Family and then some of The Swanson family.... they all seem connected.

I mailed the photo of Charley Jobes yesterday, you should have it Thursday.  Connie

I will wait to hear from Michael to see if he wants the other photos.

As for Charlie, we know this much about him from Iggy’s tireless research!

Charles Wesley Jobes, son of George Jobes and Annie May Martin. Charles served as a Private, Company C, 352nd Infantry, in WWI. He was inducted 26 February 1918. He then transfered to Co. C, 130th Infantry till discharge. Discharged 29 May 1919.
He is buried in Fort Snelling National Cemetery, Minneapolis, Hennepin County, Minnesota.

Charles Wesley Jobes was born 21 October 1891, Maple Grove township, Hennepin county, Minnesota. He died 20 August, 1969 at Robbinsdale, Hennepin county, Minnesota. Son of George Jobes and Annie May Martin. He served as a Private, in the Army during WWI, and is buried at Fort Snelling National Cemetery. He never married.
Both of his grandfathers served in the Civil War. His paternal grandfather, Bishop Jobes, served as a Corporal, in Company K, 1st Ohio Light Artillery. Bishop fought at several battles, including being at the Battle at the Brickyard, about 4pm Day I, at Gettysburg. Bishop's artillery unit held off Hay's and Avery's Confederates, while the Union line collapsed and retreated into and through Gettysburg on Day I. Charles's maternal grandfather, Stewart Martin served as a Private, in Company K, 2nd Ohio Heavy Artillery.
Both Bishop and Stewart are buried at Weaver Lake Cemetery, in Maple Grove.
Charles had two siblings, Alvin Earl Jobes and Hazel May Jobes. Alvin was married to an Edna Susan Moore. Hazel was married to Floyd J. Gilbert.
Again, I greatly appreciate this photograph. Probably was pulled from a group of photos due to its very uniqueness. An example of how quick old photos can be lost, usually forever. Should you ever come across any other Jobes photographs, please do not hesitate to contact me.
Sincerely,
Michael